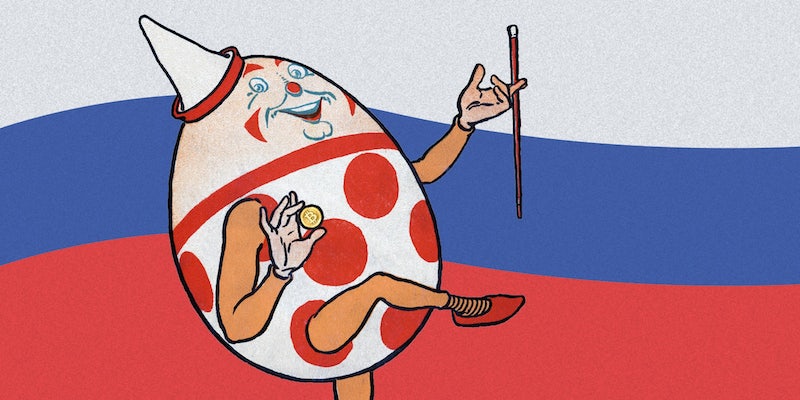 Inside the bizarre site that claims to sell Russia’s secrets

It's called the Exchange of Information, and you might be surprised what you can buy there.

Welcome to the new era of of radical transparency.

Over the past two years, Edward Snowden and likely a number of other high-level sources have provided classified information to journalists about the National Security Agency‘s spying programs. WikiLeaks has repeatedly published new caches of material in recent months. And just last week, a treasure trove of emails, invoices, and source code from the controversial surveillance-software company Hacking Team was dumped online.

Information wants to be free, as they say. But sometimes it comes with a price.

Since late last year, a Russian site with links to a reputable hacking group has been offering to sell the private communications, photos, and other tidbits of the country’s politicians and businessmen.

“We found it surprising that … there weren’t digital marketplaces where anyone could anonymously offer unique information for sale before.”

The Exchange of Information, as the site is called, has eight different listings at the time of writing. Several other caches of information have already been auctioned off, according to the site’s operators. But unlike most online stores for illegal goods, like the infamous Silk Road black market, which was only accessible on the Tor anonymity network, the Exchange of Information is available to anyone on the open Web.

There, visitors will find recent text messages and photos allegedly gleaned from the Russian prime minister’s press secretary, Natalya Timakova, a wad of letters spanning nearly 10 years from the CEO of a Russian law firm, and documents claiming to unravel the mystery of a controversial plane crash in Ukraine.

The first two items are being sold by the infamous anti-Kremlin hackers Humpty Dumpty, aka Anonymous International, for the rather staggering price of 300 bitcoin ($92,000) each. Since 2013, the group has regularly dumped the emails of several politicians, leading Humpty Dumpty’s blog to be blocked for Russian Internet users. The group gained worldwide media attention when a member broke into the Twitter account of Russia’s Prime Minister Dmitry Medvedev last year. On their blog, Humpty Dumpty has posted links to The Exchange of Information, where their hacked caches are being sold. The group also links to a listing on an earlier version of the site.

“We found it surprising that, in the age of Internet technology and the enormous request for information, there weren’t digital marketplaces where anyone could anonymously offer unique information for sale before,” a representative of the Exchange of Information, who went under the handle Libertas, told the Daily Dot in an email.

Buying and selling information the Exchange of Information works in a fairly standard way: All transactions are handled with the pseudo-anonymous currency Bitcoin, and the site owners act as an arbiter between the buyers and sellers. In the style of eBay, some listings have an auction price, or customers can purchase the information immediately for a higher fee.

Previews of the items apparently for sale are also listed and often include screenshots of emails or samples of the photos on offer.

When information is submitted to the site, the owners analyze it and give the listing a rating. How well the offered data ranks is based on the significance and exclusivity of the information; whether it affects individuals on a local, regional, or national level; and the “degree of discredit” that the information provides, according to a Google translation of the site’s description.

Around six listings have been successfully sold in the past six months, according to Libertas, who added that the site also carries out private auctions. Libertas would not say how many of these hidden auctions had taken place, but he or she claimed that the turnover for the last four months was about 1,000 bitcoins in total.

The Daily Dot was unable to find any instances of the information from any of the successful public auctions being released to the public, including in media reports. However, one Russian businessman who apparently had his emails sold on the site did not deny the authenticity of the information on offer. Instead, in a blog post, he thanked Humpty Dumpty for the “free advertising.”

At the time of publication, two other listings are indicated as being sold by Humpty Dumpty on the site, but there is no mention of those specific items on the group’s own blog. A representative for Humpty Dumpty did not respond to multiple requests for comment.

“We have no competitors at the moment. We are the first and we hope that we will be on top.”

Libertas said that the site is not being run by Humpty Dumpty, but there is something of a “mutually beneficial partnership,” with The Exchange of Information getting more exposure via the hacking group and Humpty Dumpty having somewhere to publicly sell the fruits of their hacks. In turn, Libertas said, this financial incentive will make Humpty Dumpty even keener “to share high ranked officials’ secrets to the public.”

There are some truly bizarre things about The Exchange of Information, too. One listing claims to be selling information concerning the crash of flight MH-17, which was shot down over Ukraine in July 2014 by Russian-backed separatists. For a cool $2 million, a buyer will apparently receive a full investigation from a private detective, including a forensic examination of the wreckage, records of mobile phone conversations about the crash by foreign intelligence agents, and a plethora of other pieces of far-fetched sounding intelligence.

Libertas compared the Exchange of Information to WikiLeaks—if WikiLeaks let users sell their data instead of just releasing it in bulk. “We stand for the freedom of information, but we are realistic and understand that people that could share [information] have to be at least able to do so. Therefore, we give them an opportunity,” Libertas said.

“We have no competitors at the moment. We are the first and we hope that we will be on top.”