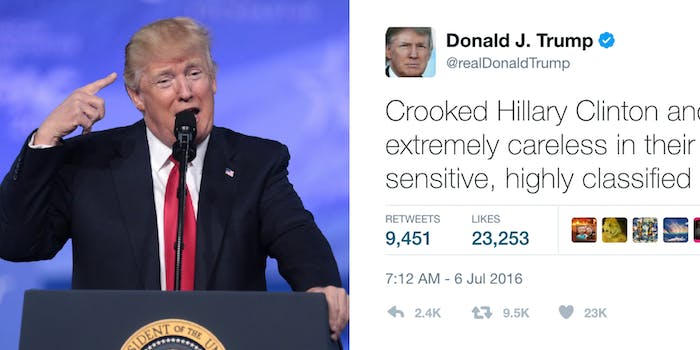 President Donald Trump may be regretting some of those things he said about “Crooked Hillary.”

Following the Washington Post‘s shocking report that claims the president shared “highly classified” intelligence with Russian officials regarding the Islamic State’s internal operations, the internet has set it sights on a Trump tweet from the thick of the 2016 presidential campaign as the height of hypocrisy.

Crooked Hillary Clinton and her team "were extremely careless in their handling of very sensitive, highly classified information." Not fit!

House Speaker Paul Ryan (R-Wisc.) is also getting dragged into to the mix for echoing Trump’s sentiments about Clinton:

Individuals who are "extremely careless" with classified information should be denied further access to such info. pic.twitter.com/0C76Ae95LD

Trump’s tweet was posted one day after former FBI Director James Comey announced the findings of the Bureau’s investigation into Hillary Clinton’s use of a private email system for her work as secretary of state.

The tables have now turned for Trump, whom unnamed officials say shared information with Russian Foreign Minister Sergey Lavrov and Ambassador Sergey Kislyak during their May 10 meeting with Trump in the Oval Office. The information Trump shared is said to have carried the highest degree of classification and was tightly guarded, even within the U.S. government.

The meeting came one day after Trump fired Comey, who was also helping lead an FBI investigation into Russia’s attempts to meddle in the 2016 election that includes probes into the Trump campaign’s contact with Moscow.

Given the Post‘s revelations, Trump may have been wise to take Clinton’s advice during the campaign: