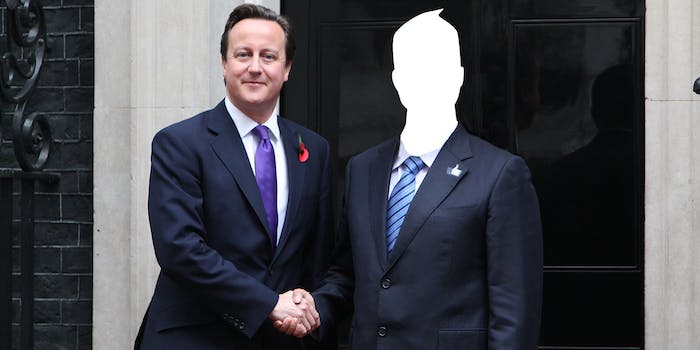 Well that could have gone better.

This week the Conservative leader paid a hefty sum to post a question in people’s News Feeds: “Tell me what matters most to you.” It was a poor choice for a politician who has become a rich source of inspiration for Internet satire, and trails the opposition party in every opinion poll. From the looks of it, the Facebook ad is not going to help.

“Getting you booted from number 10, that’s what matters most to me,” said Heidi Pilkington in one of the well-recieved comments. 10 Downing Street is the residence of the Prime Minister; it’s the British equivalent of the White House.

The most popular post came from a disabled woman, Christine Burrows, who criticized the government’s policy of cutting Disability Living Allowance.

If stunts such as these are supposed to show how Cameron gives a hoot about normal people, it doesn’t seem to be working. Many people are frustrated that Cameron’s government is out of touch with their concerns, and does not listen to them; apparently communicating to the masses via Facebook advertisements is not placating the resentment.

It probably doesn’t help that the options in the multiple choice survey people were invited to answer are ideologically biased in favor of the conservative world view.

Policies affecting the poor, such as cuts to disability and unemployment benefits, are branded “Welfare (making work pay).” And another option to answer the “Tell me what matters most to you” prompt is the loaded statement: “Dealing with Britain’s deficit and debt is the only way to get back to a strong economy.”

Many of the people who responded to Cameron’s Facebook post mocked the government at large. “I notice you’re missing boxes to tick like: ‘Workfare (making work pay a real wage),’ and ‘The horrendous government attacks on the poor’ in your selection,” said Milli Tantrum.

One of the reasons David Cameron has started paying to show his face in users’ News Feeds is because until recently remarkably few people “liked” him on Facebook compared with other world leaders, including tyrants such as Robert Mugabe.