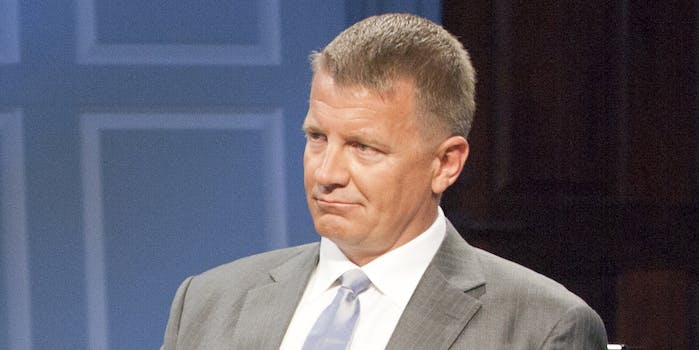 Erik Prince, the founder of the infamous private mercenary company Blackwater and brother of education secretary Betsy DeVos, has a habit of turning up when something nefarious is afoot.

Now, Prince has found himself tied up in the ongoing investigation of dealings between Russia and President Donald Trump’s campaign by Special Counsel Robert Mueller. There has been speculation that a meeting between Prince and a Russian official on a secluded island might land him in hot water. But, at this point, Prince has been involved in so many terrible things, it will be shocking if this is what brings him down.

Back in November, Prince testified before the House Intelligence Committee, insisting that while he had met with Kirill Dmitriev, head of a Kremlin-controlled wealth fund, in the Seychelles, he had not discussed creating a back channel between the Trump Administration and Russia pre-inauguration.

Since that time, Lebanese-American businessman George Nader has begun cooperating with Mueller and has said that this was precisely the purpose of the meeting. Though Prince did not have an official role in the Trump transition team, he presented himself as an unofficial envoy of the Trump administration to a number of people.

That’s damning, but this wouldn’t rank anywhere near the top of a list of Prince’s misdeeds. His mercenary company Blackwater was directly responsible for some of the most inhumane moments of the Iraq conflict, and since then, his life’s work has been to build an empire off privatized military contracts.

The Nisour Massacre was the most public of a number of events that marred Blackwater’s reputation, though their operations in Iraq were often controversial. In September of 2007, three dozen unarmed civilians were gunned down in Baghdad during a traffic jam. The gunmen were private security officers, mercenaries working for Blackwater. This triggered an investigation into Blackwater’s operations that lasted more than half a decade.

In 2009, the organization’s license to operate in the war zone was not renewed, and it was ordered to pay compensation to families of 17 killed and 20 who were seriously wounded. However, prior to the Blackwater’s expulsion from the war effort, Blackwater took in over $2 billion from U.S. government contracts. After a protracted legal battle, in 2014, three of defendants were convicted of manslaughter and another of first-degree murder by a U.S. court. But it didn’t end there. An appeals court ordered those convicted of manslaughter resentenced and one’s murder conviction will be retried. The case is still tied up in court almost a decade after the atrocities; the possibility remains that the Blackwater contractors may ultimately walk free.

What did Prince do after these terrible atrocities were laid at his feet? He renamed the company and sold it for a tidy profit. First, the name was changed to Xe Services, and the company still operates today under the name Academi. While the heat was on for Blackwater, Prince turned his attention to the United Arab Emirates, where he was contracted to build a private army.

Prince was paid over $500 million to put together a mercenary army for the Middle Eastern nation. He went ahead with the contract, even though there was an ongoing investigation into whether these kind of agreements violated the law. The year before he started the project, in 2011, Prince had been fined $42 million for training mercenary troops in Jordan. And before officially agreeing to build the private army, Prince had also put together a band of South African mercenaries to fight Somali pirates with the blessing of the UAE.

A list of potential duties that could fall to Prince’s mercenaries was obtained by the New York Times, and included “intelligence gathering, urban combat, the securing of nuclear and radioactive materials, humanitarian missions and special operations.” Perhaps most troubling was the commitment to “crowd-control operations” where the crowd “is not armed with firearms but does pose a risk using improvised weapons (clubs and stones).”

Equally troubling are reports that group was designed in part to be used to control the vast immigrant workforce in the UAE, which a number of journalists and human rights groups have called “modern day slavery.”

As though Prince hadn’t been involved in enough shady dealings in the soldiers for hire business, Prince then turned his attention to African venture capital. Specifically, Prince set up the Frontier Services Group, a company aimed at assisting Chinese investors in Africa.

This might sound like a relatively harmless venture, compared to his previous endeavors, but Frontier Services Group simply proved to be another avenue for Prince’s war profiteering. In 2016, the Intercept reported that Prince was under investigation for money laundering stemming from the group’s business dealings. In 2014, Prince began to develop close ties to prominent members of China’s Communist Party. While the Frontier Services Group was performing logistics and support work for Chinese interests in Africa, Prince was once again looking to build mercenary forces on the continent.

Since 2014, Prince has pitched at least half a dozen African countries on military services, including Libya, where various U.S. and U.N. business restrictions are in place. Part of Prince’s proposal to Libya was that he would help to stem the flow of refugees out of Africa and into Europe, many of whom were fleeing for humanitarian reasons. During these negotiations with Libya, Prince offered to open Chinese bank accounts for Libyan interests, which is how the money laundering investigation started.

And yet, there’s more. The Intercept (one of the most dogged outlets in reporting on Prince’s various projects) also reported last year that Prince is attempting to build a private air force. Another company connected to Prince, known as Airborne Industries, has been working on various projects that would lead toward a privatized air force, including equipping crop dusters with weaponry. Prince has been interested in mercenary aircraft for sometime—he deployed them in Iraq with Blackwater—but the passion has apparently grown into something of an obsession.

His self-proclaimed role as international arms dealer to the rich and powerful is what brought him to the attention of the Trump administration. Perhaps more accurately, its part of what has motivated his family to become GOP mega-donors. In addition to their goals of privatizing various government entities—for Prince, the military, and for sister Betsy DeVos, the American education system—the Prince-Devos family are also longtime Republican donors. Betsy DeVos estimated that her family has given $200 million to the Republican Party.

That is the kind of money that can buy you the Secretary of Education position and the ear of the president. Erik Prince has used this access to pitch Steve Bannon on incorporating mercenaries into the U.S. military, including replacing U.S. forces in Afghanistan with private soldiers. For a time, Jared Kushner backed the plan, which was put on ice after Bannon’s removal and the elevation of General John Kelly to chief of staff.

Prince is not likely to head to prison any time soon. In fact, he may be headed for the Senate. Prince has explored political runs in various states, but has apparently landed on Wyoming. Without a hint of irony, Prince has positioned himself as an outsider against incumbent Sen. John Barrasso (R), and admitted to exploring a run late last year. If Prince secures a Senate seat, he will be able to continue his campaign to privatize the military even if he falls out of favor with President Trump.

After all of his shady dealings, it would be pretty unbelievable if a short meeting with a Russian official is what sinks him. And even if his Senate bid does fail, it seems with Erik Prince, the next mercenary venture is always just around the corner.