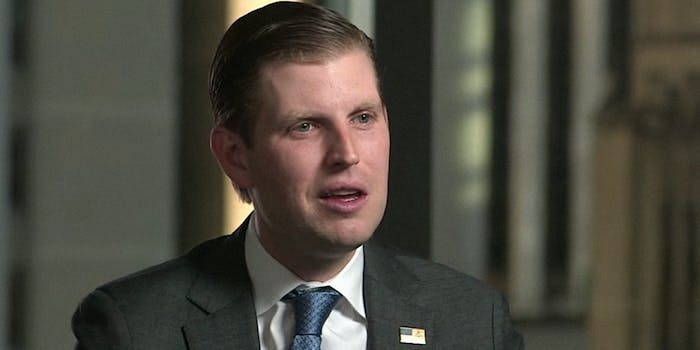 Eric Trump in 2014: ‘We have all the funding we need out of Russia’

This could be big.

Eric Trump, the adult son of President Donald Trump, reportedly told golf writer James Dodson in 2014 that the family didn’t need to rely on banks to fund Trump-branded golf courses, because “we have all the funding we need out of Russia.”

Needless to say, the comment jumps out amid Dodson’s story about playing golf—and eating a cheeseburger—with the president three years ago. That’s entirely thanks to the ongoing investigation into potential coordination between the Trump campaign and the Russian government during the 2016 election, investigations which are currently playing out in Congress and at the FBI.

For his part, Trump has insisted again and again that there’s nothing to the Russia allegations, and, in the process, has insisted that he barely has anything to do with the country, even in a business sense. During an occasionally heated press conference in February, he insisted that the Russia story was little more than a “ruse.”

But when Dodson asked Eric where the funding for the Trump North Carolina golf course came from, noting that it was virtually impossible to get banks to back such projects in the aftermath of the 2007 global financial crisis, the middle Trump son reportedly replied as follows.

Well, we don’t rely on American banks. We have all the funding we need out of Russia. … We’ve got some guys that really, really love golf, and they’re really invested in our programs. We just go there all the time.

Golf writer says Eric Trump told him in 2014: "We have all the funding we need out of Russia" https://t.co/D0wbaLiVa6 pic.twitter.com/ZThk1ecm3i

If Dodson’s retelling of this conversation is true, it’d be the second time a past comment from one of the president’s adult sons undermined his efforts to distance himself from Russia. The other came in 2008, when Donald Trump Jr. reportedly told a real estate conference that his father’s business was heavily linked to Russia.

“Russians make up a pretty disproportionate cross-section of a lot of our assets,” Don Jr. said. “We see a lot of money pouring in from Russia.”

Needless to say, these comments alone don’t prove anything about the nature of the Trump clan’s current connections to Russia, but they do crucially undercut the president’s repeated, strenuous insistence that he has “nothing to do with Russia.” According to USA Today, Trump and his associates have publicly denied any links between the campaign and Russia at least 20 times, even as additional scrutiny mounts.

The controversy figures to grow ever greater on Monday, when former acting Attorney General Sally Yates is scheduled to testify before the House committee investigating Russian interference in the 2016 election. Her testimony is expected to contradict the administration’s version of events about how she informed it of former national security adviser Michael Flynn’s potential vulnerability to blackmail by foreign governments.