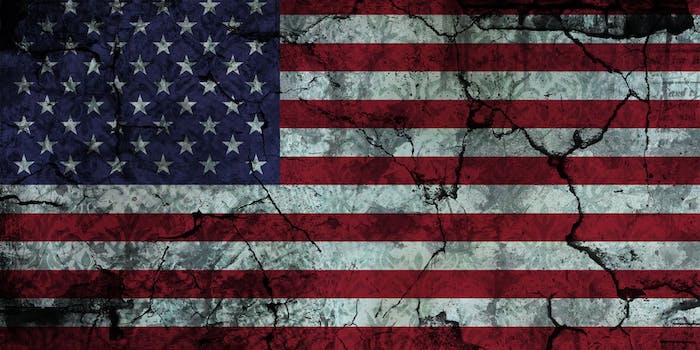 The online battle over the Eric Sheppard challenge

This story has a little bit of everything.

A photograph of a black college student trampling an American flag during a protest in Georgia last month has set off a social media frenzy—but you may have never heard of it.

In typical 2015 fashion, the incident spawned an Internet-video challenge, a viral hashtag, and a counter-Internet challenge. And, to top it all off, a former Playboy model was arrested in the mix, the one part of this whole tale that was widely covered by the mainstream press.

On April 17, a 22-year-old named Eric Sheppard attended a protest at Georgia’s Valdosta State University, where he and several other students were photographed walking on an American flag.

To convolute matters, police discovered a backpack containing a firearm on university property the following week and claim to have “unmistakable evidence” linking it to Sheppard. Authorities issued an arrest warrant charging him with a felony for bringing a weapon into a school safety zone, and he’s reportedly under investigation by the Federal Bureau of Investigation for making terroristic threats on social media, according to a local news station.

Sheppard has been on the lam ever since, but that’s just the launch pad for something much bigger.

A day before Sheppard’s alleged firearm was discovered, the story of his protest had already hit the Washington Post’s website—sort of. Sheppard wasn’t mentioned by name. The focus of the article was Michelle Manhart, a former Air Force staff sergeant and 2007 Playboy model, who was arrested at the university after trying to take the trampled flag away from the students.

The media attention was no accident. Manhart had alerted a local TV station before arriving at the university to confront the protesters. But as the Post reports, Manhart’s tug-of-war with a female protester over the walked-on flag didn’t go as she’d hoped:

“You are disobeying our lawful command,” the cop says. “Let go of this flag, ma’am.” When Manhart continues resisting, the officers pin her to the ground and handcuff her to a smattering of applause from the students.

Largely ignored by the media—at least, until a gun was discovered—was Sheppard, whose discourse was recorded in a 5-minute video later uploaded to YouTube. In the video, he talks about the stages of oppression experienced by black Americans, from slavery to the contemporary prison system. He describes Christianity and the painting of Jesus Christ as a white man in the slavery era as tools of “spiritual slavery.”

“What I’m saying to you all,” he continues, “is a warning of death that is coming upon this nation if y’all don’t turn from y’alls ways. And this is the collective white race.”

Sheppard identifies as a member of the New Black Panthers Party, though few details have been reported regarding his broader political views. During the video, he offers context for the demonstration by mentioning the death of 17-year-old Kendrick Johnson, who was found dead in January 2013, rolled up in a wrestling mat in the gymnasium of his George high school, not far from Sheppard’s university.

The Lowndes County Sheriff’s Office ruled Johnson’s death an accident. An independent autopsy performed at the behest of the his family, however, determined his death was caused by a blunt force trauma. A Justice Department investigation that started nearly 19 months ago remains open, and by all appearances there’s been little to no progress.

A spokesperson for the sheriff’s office told the Daily Dot on Friday that Sheppard was still at large. Over the last 16 days, his supporters, who say he’s been “warned that he should not turn himself in,” have so far raised over $1,900 with an Indiegogo campaign. Another campaign, on Crowdrise, has so far raised over $570.

“I’m sick of people saying that we’re treating him wrong,” Valdosta Police Chief Brian Childress told a local ABC affiliate in April, “or we’ve done something wrong to him, or he’s in fear for his life. Fear of what? He’s the one who brought a gun to campus.”

The day after Sheppard fled from police his father, Eric Sheppard, Sr., issued a statement, asking that he turn himself in.

“Son, you know we love you and have always taught you to do the right thing and make wise decisions,” the senior Sheppard said. “Please make the right decision and turn yourself in, either to the authorities or to me, and we will handle this together. We love you and are here for you, as you requested.”

Meanwhile, Sheppard’s supporters have taken to Twitter with the hashtag #EricSheppardChallenge. The challenge is apparently for users to post photographs or video of themselves walking, or in some cases dancing, on top of an American flag.

A video posted by Georgia resident Erica Walker on Facebook, in which she does the running man on top of an American flag, has been shared over 1,000 times and referenced in dozens conservative news reports.

“My name is Erica Walker, and I’m about to do the Eric Sheppard Challenge,” she says in the clip, later yelling: “Fuck yo flag.”

Walker later posted on Facebook that she was receiving death threats. “I wonder if anyone … will be charged with attempted murder or conspiracy to commit murder,” she asked. “If I come up missing, there sure will be a lot of suspects.”

For the most part, the Eric Sheppard Challenge hashtag has backfired. For every photo of someone stepping on a flag, there’s ten more depicting wounded American veterans. A black man, who lives in Houston, according to his account, tweeted a photo under the hashtag of the Tuskegee Airmen, the famous African-American pilots who fought in World War II, with the words “Think before you stomp.”

Random images of the disrespected.. Think before you stomp. #EricSheppardChallenge pic.twitter.com/DyTTSIEyap

Naturally, the challenge did not go unanswered by those who’ve characterized it in the press as “vile” and “anti-American.” A pro-flag counter-challenge was initiated this week by Dakota Meyer, an Afghanistan war veteran and Medal of Honor recipient. He’s asked Twitter users to post “patriotic photos” using the hashtag #NeverOutGunned.

“We love our country, and we love it more than anything in the world,” he told Fox News. “And I want you to go out and show your patriotism, and take a picture of something that means something to you that represents this country, whether it’s the flag, whether it’s the Constitution, whatever it is.”

In response to the Eric Sheppard supporters, Meyer added: “If they don’t want to be here, they can leave.”

The protest in Georgia hasn’t reignited any scholarly debate over the legitimacy of flag desecration. In Sheppard’s case, the police were quick to handcuff the only person trying to stop the demonstration.

To date, there are only a few notable cases against people desecrating the American flag in the span of our country’s history, but the battle ends with destruction of the American flag being protected under the Constitution as a legitimate mode of political expression.

In June 1862, Confederate loyalist William Mumford was hanged after removing the American—ahem, Yankee—flag from a New Orleans mint and dragging it through the streets, thereby creating a historical basis for the few who believe disrespecting the flag should be considered an act of treason punishable by death.

In Dallas, 1984, Communist youth Joey Johnson torched the flag at an anti-Reagan protest outside the Republican National Convention. He was sentenced to a year in prison, but a Texas court overruled the conviction on appeal. The U.S. Supreme Court later upheld that decision, citing Johnson’s First Amendment rights.

In response to Johnson’s case, Congress passed the Flag Protection Act, which only led to more flag burning, and yet another Supreme Court case. In the 1990 United States v. Eichman, the justices upheld, once again, the right of Americans to douse Old Glory in turpentine and strike a match anytime they feel like giving Uncle Sam the ol’ one-fingered victory salute.

The flag stomping at Valdosta State University, while providing a colorful backdrop for the authorities’ pursuit of Sheppard, is unlikely to be recorded in the history books alongside these other noteworthy flag cases.