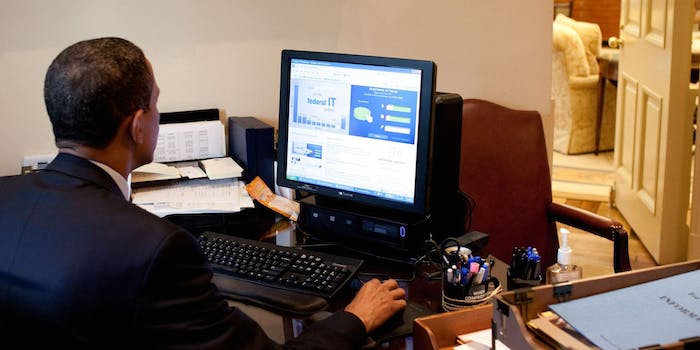 'The White House’s silence on encryption is deafening.'

Conservative groups have written to President Barack Obama asking him to back a push for strong encryption.

FreedomWorks, the R Street Institute, TechFreedom, and other right-leaning groups joined a letter from the Niskanen Center urging the president to block efforts within his administration to require “backdoors” in hardware and software encryption.

FBI Director James Comey, Director of National Intelligence James Clapper, and other senior law-enforcement and intelligence officials have sparked a new “crypto war” by advocating for weaknesses in encryption technology to make police and surveillance operations easier. They have warned that criminals and terrorists are increasingly stymying investigations by hiding behind encryption, but the evidence for this claim remains anecdotal at best.

“There is no such thing as a backdoor that only the U.S. government can access.”

U.S. officials have been privately debating what stance the president should take in the encryption debate; a leaked draft policy paper outlined several controversial backdoor solutions but noted their immense technical and political risks.

A spokesman for the National Security Council, which coordinated those discussions, did not immediately respond to a request for comment about the letter.

The letter from the conservative groups argued that the U.S. government should reject those encryption-weakening impulses “for the sake of its own citizens and to maintain its global leadership and moral authority on Internet freedom.”

“The mere possibility of nefarious agents abusing these tools does not automatically justify banning them,” the groups argued in response to months of encryption doomsday talk from Comey, Clapper, and other national-security officials.

Obama, who has publicly voiced support for encryption in the past, is caught between equally vocal camps: a cadre of his senior intelligence advisers, who worry that strong encryption could mask the next major terrorist attack, and a chorus of security experts, Silicon Valley firms, and privacy advocates warning him of the technical and political risks.

“The White House’s silence on encryption is deafening,” Tom Struble, a policy counsel at TechFreedom, said in a statement.

“There is no such thing as a backdoor that only the U.S. government can access,” the letter reads. “Any attempt to weaken encryption means making users more vulnerable to malicious hackers, identity thieves, and repressive governments.”