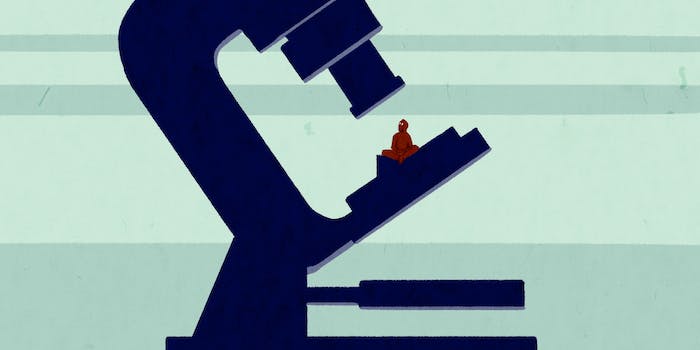 Minorities and women largely shut out of encryption debate

Minorities bear the brunt of surveillance, but the debate is almost entirely white.

Surveillance in the 21st century deeply impacts minority communities in the United States, but they have almost no voice in the debate over spying and encryption compared to wealthy white males.

The latter group dominates the Washington, D.C., hearings, academic panels, and board room meetings where the most heavy-duty decision making is taking place, a Daily Dot review found.

The debate over encryption reached new heights this week, as Apple CEO Tim Cook publicly refused to comply with a court order requiring the company to help the Federal Bureau of Investigation unlock the iPhone of one of the San Bernardino shooters.

Cook has become the leading voice in the fight for strong encryption largely due to his position as the chief executive of the world’s most valuable company.

In 2007, a University of Maryland study explored the “chilling effect” of government surveillance on American Muslims’ use of the Internet. One of the most famous examples is the NYPD’s Demographics Unit, which targeted wide swaths of the Muslim community for surveillance regardless of criminality. In 12 years, the program led to zero leads or arrests.

The U.S. Department of Homeland Security and the New York Police Department surveilled the online activity of Black Lives Matter activists, even for peaceful events, following protests and riots in Ferguson, Missouri, in 2014.

While minority communities are disproportionately targeted by surveillance, according to the American Civil Liberties Union (ACLU), the imbalance is perhaps more stark in the debate over strong encryption, the one tool available to evade widespread surveillance.

Approximately 90 percent of the most prominent voices in today’s debate over surveillance are white individuals, many of whom are exceptionally wealthy, according to a Daily Dot review of several high-profile and impactful exchanges about surveillance and encryption in America conducted over the last eight months. A full 75 percent of the voices are from white men.

At a recent panel on the encryption debate in Austin, Texas, ACLU’s Principal Technologist Christopher Soghoian pointed out the disparity.

“This is a room filled with people who went to very good universities, most of whom probably make more than $100,000 per year, and many of whom already have a device in their pockets that encrypts their data by default,” he said. “The reason we’re having this debate is it looks like the poor and minorities and those who are most surveilled in our society are about to get encryption technology. And people are really upset.”

Soghoian, who called the debate “a problem of equality and racial justice,” noted that the entire gathering included no African-Americans and no Muslims, “the people who are the most surveilled in our society.”

While this is by no means an exhaustive review of all recent important discussions of these issues, we believe the selection is representative the overall demographics of debate. It’s also clear that assigning ethnicities can be an inexact task at best, but we believe the count strongly reflects the color of the debate.

The situation for minorities and surveillance is similar outside the United States. In China, which already boasts the most heavily surveilled cyberspace on earth, the Muslim Uighur minority is subject to especially focused monitoring and harsh punishments.

Below is the collection of prominent events, hearings, letters, and discussions on the American encryption debate that informed our conclusions above: