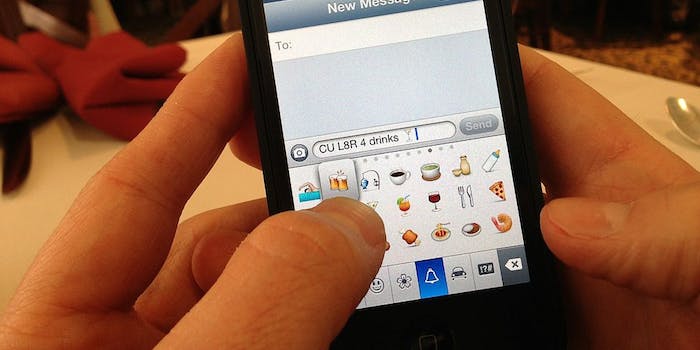 There are very few emoji that represent non-Caucasians. This may change.

Emoji are so versatile, someone even rewrote Moby Dick using only the colorful Japanese smileys. Someone else made an excellent (and less borderline-NSFW) music video to Beyoncé’s “Drunk in Love.” And most people use them as a substitute for typing actual words while texting.

But emoji aren’t perfect. In fact, many people think emoji are racist because of the conspicuous lack of non-white icons (especially odd considering they come from an Asian company). Last year, people even created a petition to Apple asking for more emoji of color for the next software update.

That didn’t happen, although Apple did spur some increased diversity by including same sex-couple emoji. But an Apple employee told MTV that the company is aware of the problem and wants to change it.

“We agree with you. Our emoji characters are based on the Unicode standard, which is necessary for them to be displayed properly across many platforms. There needs to be more diversity in the emoji character set, and we have been working closely with the Unicode Consortium in an effort to update the standard,” Katie Cotton, the vice president of worldwide corporate communications for Apple, wrote MTV.

It’s sad it’s taken Apple so long to figure this out. Even Miley Cyrus realized that the lack of emoji diversity was bogus… way back in 2012.

RT if you think there needs to be an #emojiethnicityupdate

This isn’t the first time people have called for additional emoji. There’s currently a push for a hot dog emoji. But here’s hoping Apple focuses on pushing the Unicode Consortium to make ethnically diversifying emoji first.