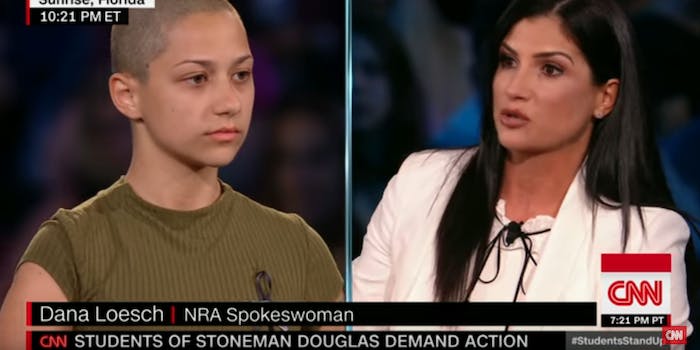 Emma González now has more Twitter followers than the NRA

She only joined the platform days ago.

Marjory Stoneman Douglas High School student Emma González, who after the Valentine’s Day shooting at her school has become a voice for gun control, now has more followers on Twitter than the National Rifle Association.

González, who only joined the social media platform 10 days ago, has amassed 980,000 followers, almost double the NRA’s 586,000 as of midday Monday.

The 18-year-old student first entered the spotlight two days after a gunman entered 17 people at her school in Florida on Feb. 14. González delivered a powerful 11-minute long speech at an anti-gun rally calling out President Donald Trump and other lawmakers for receiving donations from the National Rifle Association.

“Thirty million dollars,” she said of the amount Trump reportedly received. “And divided by the number of gunshot victims in the United States in the one and one-half months in 2018 alone, that comes out to being $5,800. Is that how much these people are worth to you, Trump? To every politician who is taking donations from the NRA, shame on you!”

Leading the gathered crowd in a call and response, listing off reasons for inaction made by lawmakers and the gun lobbyists and closing each statement with: “We call BS!” González demanded that lawmakers pass gun control legislation and that companies begin to boycott or cut ties with the NRA.

González poignant speech led to an appearance at a CNN forum in which the young activists confronted NRA spokeswoman Dana Loesch—whose online following the student has also surpassed. As González pressed Loesch on the availability and accessibility of high-powered assault rifles, like the AR-15 used in the Florida shooting and deadly modifications available on the market, the NRA representative held that it was the mental health of the shooter, and not guns, which were the problem.

The exchange, added to the prolific speech, has quickly made the student one of the most visible and recognizable gun control activists in the country—the face of the #NeverAgain movement.

All in less than two weeks.