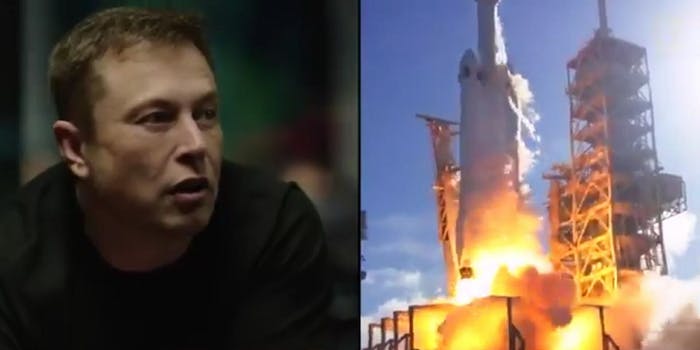 Watch the video and revel in his joy.

In case you were wondering what SpaceX CEO Elon Musk’s reaction was while launching the Falcon Heavy rocket for the first time, National Geographic captured it in a behind-the-scenes look.

“Holy flying fuck, that thing took off,” Musk exclaimed last Tuesday when the rocket cleared the pad. Then, he looked around the room in apparent stunned joy before running outside to celebrate SpaceX’s newest accomplishment, saying, “That’s unreal.”

The 3 million pound spacecraft, made up of three Falcon 9 rockets strapped together, is the most powerful rocket to be launched from earth. Before the rocket successfully lifted off, Musk apparently was unsure whether SpaceX’s experiment would work, saying we would see either “a great rocket launch or the best fireworks display.”

Musk also attached his Tesla Roadster to the rocket, complete with a dummy astronaut driver named Starman and a livestream of its journey into space.

It was quite an accomplishment for Musk and his company, and his initial thoughts on the matter seem like the perfect reaction.