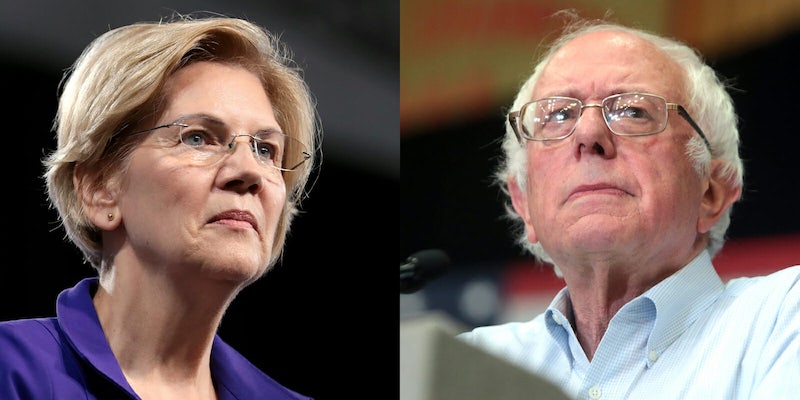 A photo snapped of 2020 Democratic presidential hopefuls Sen. Elizabeth Warren (D-Mass.) and Sen. Bernie Sanders (I-Vt.) sitting in adjacent rows on a flight to Miami has become the first good meme of 2020.

The photo, posted by Steve Clemons of The Hill, shows Sanders sitting in a window seat on a plane, Warren sitting in the same seat one row behind him, and a person sitting in the middle seat next to the Vermont senator not looking thrilled about the situation.

Soon enough “Middle Seat Guy” became a meme, with everyone joking about his apparent unenthusiastic feelings about being caught in the photo.

Many people believed his expression was indicative of everyone’s feelings heading into what is sure to be a never-ending, exhausting, 2020 cycle.

That guy next to Bernie is all of us watching this Dem primary unfold. https://t.co/xebUuJO2wU

Guy in 15B thought bubble: "Ugh I booked a Miami vacation to get a break from this shit" https://t.co/0xDA8VNNI2

we're all the guy sitting next to Sanders. https://t.co/X11QRhVpzB

But there were also quips about the situation in general.

I bet Bernie leans his chair back to take a nap. https://t.co/kyVjl7ZaRA

tfw when you see a coworker outside of work and you try and figure out how much you actually have to interact https://t.co/vA6ZYN8Twd

they are both seated above the left wing. https://t.co/lQGcn6lquQ

Both Warren and Sanders will be participating in the first Democratic 2020 primary debates next week, although, because of the amount of candidates, they will be speaking on separate days.

The debates will take place on Wednesday and Thursday next week.