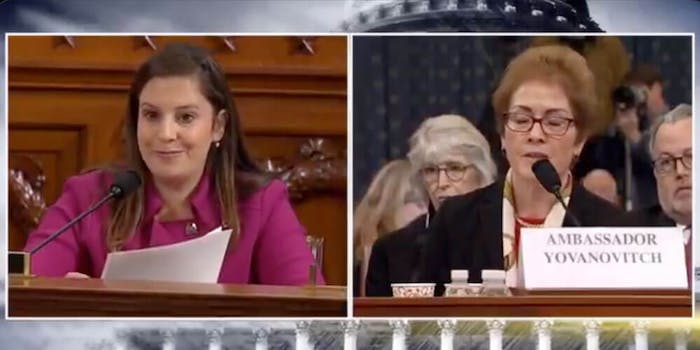 Critics of Elise Stefanik shared the photo on social media over the weekend.

The alleged photo went viral after being showcased by Twitter user Brian J. O’Malley the day after former ambassador to Ukraine Marie Yovanovitch testified in front of the U.S. House of Representatives.

“Stefanik posed for this picture as Ambassador Yovanovitch was getting a loud standing ovation after giving testimony yesterday,” the tweet read. “NY21 deserves better than this childish loser.”

But as the photo spread, many began questioning whether it was even real. When one Twitter user suggested that the image might be Photoshopped, O’Malley disagreed “as someone who uses Photoshop daily.”

The photo, however, is entirely fake. And several clues gave it away.

For starters, as noted by Maddie Anderson, one of Stefanik’s staff, the representative was not wearing fingernail polish during the hearing, as is shown in the photo in question.

Secondly, footage of the alleged moment shows that Stefanik never made such a gesture.

A side-by-side of the original image and the doctored photo also began making rounds on Twitter.

Sharing a doctored photo of a Member of Congress just because you don’t like her politics is disgusting. @BrianJOMalley here is your garbage tweet verses the REAL photo. Shameful. pic.twitter.com/hZC9B6ZjvX

All in a days work for @gtconway3d.

(Second screenshot courtesy of @JerryDunleavy — George has since deleted it but not before spreading it to hundreds of thousands in multiple tweets) pic.twitter.com/uF9bBrsuIV

O’Malley, Conway, and several others who shared the photo eventually removed their tweets.

“I took down the picture after of Stefanik after someone pointed me to a graphic artist who had it on his timeline as an example of his ‘work,'” O’Malley tweeted.

I took down the picture after of Stefanik after someone pointed me to a graphic artist who had it on his timeline as an example of his "work." I won't defame him here.

I take responsibility for it as it was my tweet. It looked real to me, because of a number of factors, (more)

O’Malley also apologized to Stefanik in subsequent tweets, although the representative did not respond.

@EliseStefanik I erroneously posted an image of you that I believed was real. I deleted the image after it was exposed as a fake.

I take full responsibility for what I did. I've spent the last 2 hours apologizing to all who saw it.

I apologize to you most of all for my mistake

The incident shows once again how quickly inaccurate information can spread in the age of social media.