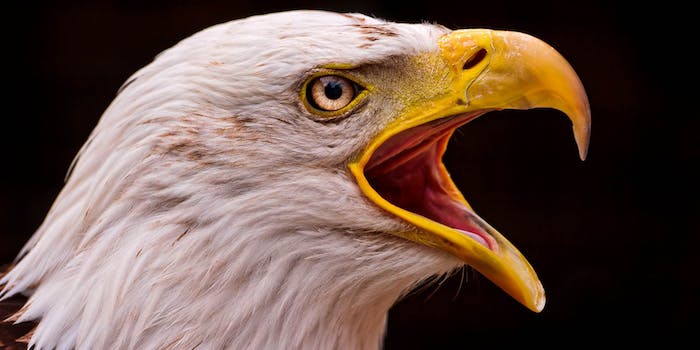 This eagle hates drones, takes one out of the sky like a pro

Melbourne Aerial Video got more than it bargained for when their aerial camera encountered an eagle.

Eagles are awesome at everything.

We humans see in three basic colors, but eagles can see ultraviolet light too. Many eagle species will lay two eggs only to see the stronger firstborn kill its little sibling upon hatching. Add to these fearsome facts that eagles can successfully take down camera-equipped drones, and it’s easy to see how they acquired their long-standing status as a symbol of power.

The footage below, captured by Melbourne Aerial Video, ought to only lend credence to the eagle myth. The camera company’s unmanned aerial vehicle, perhaps the most advanced of mankind’s puny attempts to take to the skies like a bird of prey, films its encounter with a fierce bird of prey. Melbourne Aerial Video indicates in the title of its video that the eagle emerged unharmed, but the drone very clearly ended up grounded and out of commission.

Should drone owners be worried about the newest, coolest threat from the skies? Probably. But assuming a drone pilot is capable of recovering the device and its onboard eagle attack footage, flying high with America’s favorite bird is probably well worth the risk.

H/T Mashable | Photo via Tambako the Jaguar/Flickr (CC BY 2.0)