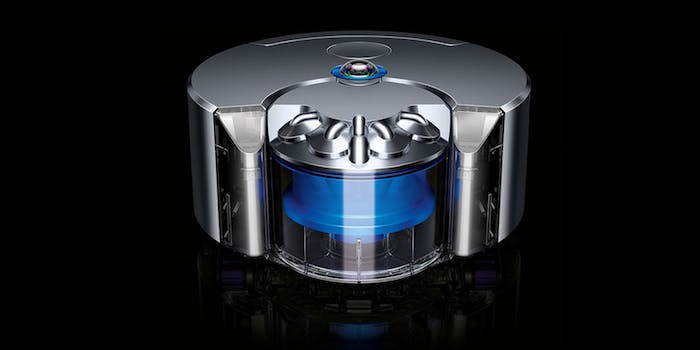 There's an app for cleaning that.

We are inching closer to the spotless futuristic homes of The Jetsons, because today Dyson announced that it will introduce automated roving technology to its vacuum cleaners by releasing a self-guided vacuum robot.

The Dyson 360 Eye, the price for which hasn’t yet been announced, is the result of Dyson’s efforts to build a robot that is powerful enough to be worth the investment—and as the Verge reports, that investment is said to be around $47 million over the past 16 years.

The release of iRobot’s Roomba in 2002 jump-started a revolution in robotic home automation. The Roomba went full Internet and even became something of a meme. But in announcing Dyson’s own entry into the market, James Dyson, the company’s founder, called most of the 360 Eye’s existing competitors “gimmicks,” because they “don’t see their environment, have little suction, and didn’t clean properly.”

In a video released with the announcement, Dyson explains how his new creation aims to change that. “The problem with existing robot vacuum cleaners is that they have very poor suction,” Dyson says. “We’ve developed a high-speed digital motor, which, combined with the powerful cyclones, gives us very powerful suction.”

The 360 Eye will also connect with a new Dyson Link app, available for iOS and Android, that lets the user create and monitor a custom cleaning routine for the robot.

If nothing else, the 360 Eye is certainly a stylish Roomba competitor from a company that is known for its innovative vacuum cleaner research and design. The device is expected to be released in Japan in the spring of next year, followed by releases in the rest of the world.