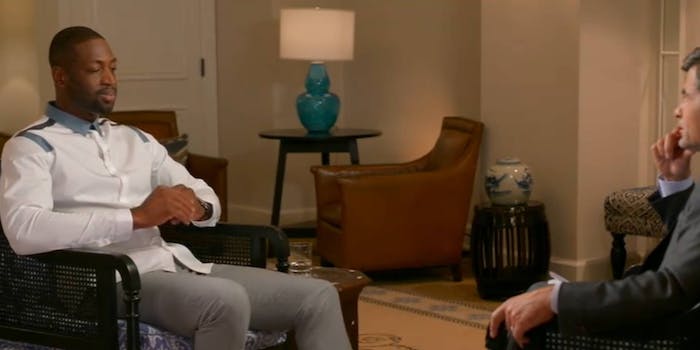 "I want my family to grieve in private as much as possible."

NBA superstar Dwyane Wade sat down with George Stephanopoulos for an emotional interview on Good Morning America Friday morning. Over the course of his appearance, he discussed his efforts to combat gun violence as well as the killing of his cousin last weekend.

Nykea Aldridge was fatally shot the afternoon of Aug. 26, caught in the crossfire of an altercation that had nothing to do with her. Two suspects were arrested two days later, a development that made few headlines. Instead, the world appeared to be focusing on what Donald Trump had to say about Aldridge’s death.

Wade stated that he wished his family could grieve privately, airing his frustrations over the fact that many chose to use his name to highlight this tragedy rather than Aldridge’s. With Trump, the GOP nominee used the shooting as a means to promote his campaign. The Donald initially misspelled Wade’s name before tweeting out the same message with the correct spelling:

He followed that up hours later with a message of condolences:

Wade had this to say about Trump’s tweets:

“I’m kind of conflicted. On one hand, [Aldridge]’s death is used as a ploy for political gain. On the other hand, it’s a national story. It goes back to that for me. I want eyes on this city. I want us to be able to do more together and the only way we can do more together is for people to know what’s going on. I was grateful it was a conversation but on the other hand, it was a bad taste in my mouth because of what my family is dealing with… and it looks like it’s being used as a political gain.”

The Chicago Bulls shooting guard has made a dedicated effort to help his community under his Wade’s World Foundation. Those interested in furthering the nonprofit’s goals of empowering and aiding at-risk youth are encouraged to visit its website.