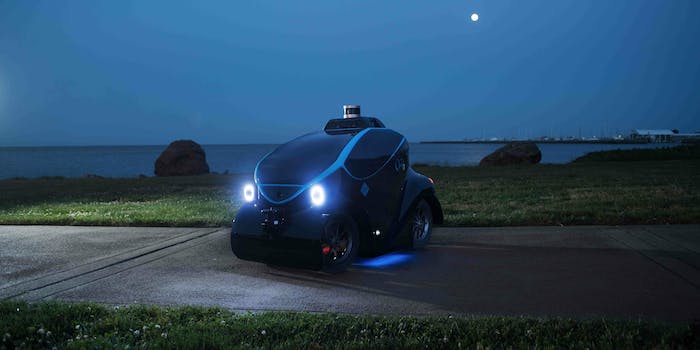 Dubai to employ robotic cars that scan for criminals

'Minority Report' is here (sort of).

Dubai is dead set on making the world of Minority Report a reality. In addition to flying taxi drones and jetpacks for city firefighters, Dubai plans to deploy robotic patrol cars on its city streets. These cars will use biometrics to scan for criminals, suspected criminals, and other “undesirables” as they drive along.

“Dubai Police are keen to get the latest technology to fight crime,” Major-General Abdullah Khalifa Al Merri, commander-in-chief of the Dubai Police, told Gulf News. “We always search for the best technology to serve our police work for a safer and smarter city.”

Dubai plans to launch a fleet of these vehicles, the diminutive OTSAW Robotics O-R3, before the end of the year. These pint-sized vehicles can perform 360-degree surveillance using biometric software to scan human passersby. And, reminiscent of one of those Russian Matryoshka nesting dolls, inside, you’ll find an aerial drone. This drone launches from a bay that opens from the backside of the car, and can then follow criminals places where the vehicle itself can’t drive. Both the land-bound drone and its baby airborne drone are monitored remotely by Dubai police. The O-R3 can also charge itself (as any good robot, should).

The O-R3 robot will not replace human officers. Instead, it will augment Dubai’s human police force by handling low-level tasks. (Most of the time, it sounds like it would be a glorified security patrol vehicle, the kind you see cruising around mall parking lots.)

Dubai has an ambitious goal of having a police force that’s 25 percent robotic by the year 2030. This fleet will be a big step toward accomplishing that metric: According to OTSAW, the Dubai Police Force will be purchasing up to 100 O-R3 units, which will be deployed by 2020.