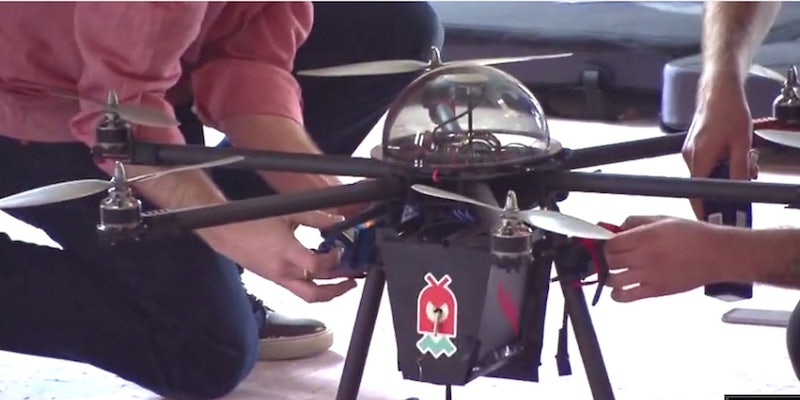 Watch an intern get zapped by a Taser drone at SXSW

This dude endured an 80,000-volt Taser to demonstrate the (literally) stunning power of a new drone.

Are you surprised a man got zapped with an 80,000 volt stun-gun by a drone at SXSW? You shouldn’t be.

With Amazon planning drone-based deliveries and Facebook recently acquiring a drone-making company, sometimes we forget drones are primarily used for more nefarious tasks than getting books to your doorstep quickly or boosting Internet connectivity in developing nations. Drones remain an integral part of military operations. They are creepy flying robots and they can mess you up.

Mobile software firm Chaotic Moon (the same company behind Oculus Rift masterpiece SharkPunch) demonstrated its Chaotic Unmanned Personal Intercept Drone (CUPID), which could also be called TaserDrone because it will repeatedly zap a detainee with an 80,000-volt stunner.

Video of the demonstration shows how the stunning barbs shoot out of the CUPID, which looks like the world’s most badass model helicopter:

U.S. law dictates that crazy-scary flying weapon robots need to be operated by more than one person, so someone will pilot the drone and another person will decide when to stun people, so I guess that’s a good safety precaution, but it seems as though the world will get just a little freakier if this kind of unmanned craft gets popular—in the demonstration, paramedics checked to make sure Sheehan was OK before and after the attack, and the CUPID only zapped him once. But the CUPID can deploy its stunner more than once, for up to 10-second increments. It could easily result in fatalities. Here’s hoping it remains a novelty to be trotted out for major conferences and not something used to apprehend people on the street.