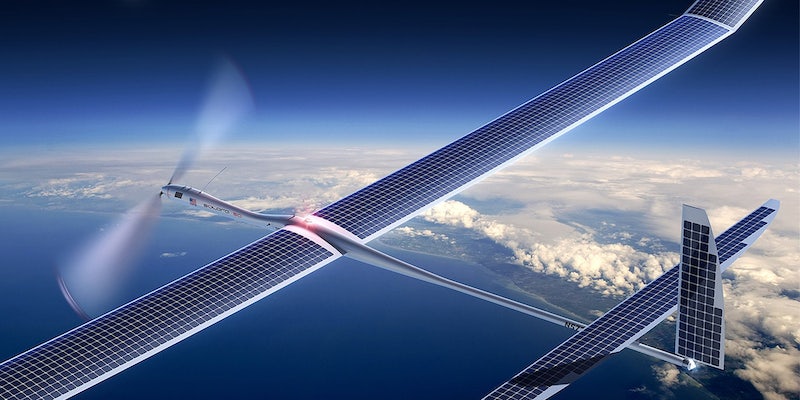 What Facebook can do with a $60 million drone fleet

Most websites would be thrilled to have Facebook’s kind of traffic. With 1.23 billion active monthly users, more than one-seventh of the world’s population is on the social network. But that’s apparently not good enough for Facebook, which is exploring an ambitious plan to expand its potential userbase by spreading Internet access around the world.

According to TechCrunch, Facebook is presently in talks to acquire Titan Aerospace, a drone manufacturer pioneering a cost-effective alternative to orbital satellites. The social network reportedly wants to purchase the New Mexico–based company for $60 million.

The plan is to use Titan drones as part of the Internet.org campaign, or which Facebook is a main supporter. The campaign seeks to bring Internet access to the roughly 5 billion people in developing nations who don’t have it.

Where do drones come into the picture? Well, Titan Aerospace specializes in a particular type of high-altitude, solar-powered unmanned aerial vehicle that is capable of sustaining continuous flight for five years at a time. The company calls their drones “atmospheric satellites,” in that they operate similar to conventional satellites, constantly flying around the Earth, but without have to go into space. This makes them a cost-effective alternative to space satellites.

Facebook’s plan is to reportedly work with Titan Aerospace to produce 11,000 of these drones—capable of flying at over 20 km in altitude—and outfitting them with mobile broadband technology that would provide Internet access to remote and developing regions of the globe.

Speaking at the Mobile World Congress in Spain last month, Facebook founder Mark Zuckerberg discussed the importance of Internet.org and its mission to connect the rest of the world’s population to the Internet. He expressed Facebook’s long-term commitment to the project, pledging a substantial monetary investment.

Though it’s an unorthodox plan, communication’s drones might be the perfect avenue for connecting people in developing nations to the Internet. As the Guardian points out, mobile data usage is far more common in developing nations than fixed broadband connections by a 3:1 ratio. There are 1.2 billion mobile subscribers in the developing world versus 357 million people with permanent broadband connections. The drones could expand this mobile footprint.

Facebook is no the only company as of late to experiment with drones as a means of enhancing their service. In December, Amazon made headlines when CEO Jeff Bezos announce that his company was exploring the use of unmanned drones for localized deliveries.