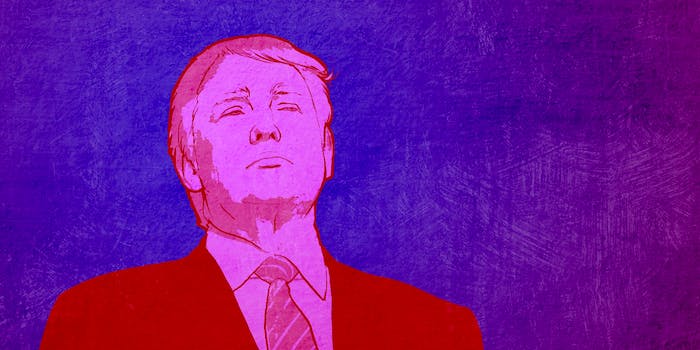 It wouldn't be the worst thing he's tweeted.

According to Bloomberg, Trump’s advisers are worried that he will candidly take to Twitter with news of his vice presidential pick, despite Trump’s assurances that he’ll announce his running mate at the Republican National Convention in July.

And rightfully so, because Trump’s Twitter history is less than spotless.

Sure, the presumptive GOP presidential nominee has used his social media persona to share uplifting videos of everyone’s beloved Trump Train anthem and to prove his love for Hispanics and Trump Tower Grill (Café?) taco bowls.

But more often than not, Trump’s dramatic, quick-tempered responses to haters, trolls, and the media have come off as more detrimental than presidential.

Trump has frequently garnered criticism for these casual Twitter practices—from fueling the fire during his controversy with Fox News host Megyn Kelly to pushing back against accusations that a reporter was assaulted by his campaign manager, from starting a fight with Massachusetts Sen. Elizabeth Warren to attacking so many of his potential running mates. Sad!

Here are even more examples.

I hope corrupt Hillary Clinton chooses goofy Elizabeth Warren as her running mate. I will defeat them both.

I am watching two clown announcers on @FoxNews as they try to build up failed presidential candidate #LittleMarco. Fox News is in the bag!

Victory press conference was over.
Why is she allowed to grab me and shout questions? Can I press charges? pic.twitter.com/qbW2RjkINX

An accidental retweet insulting Iowans here, an unfortunate use of Nazi soldiers superimposed onto the American flag there, and it’s no wonder Trump’s best people cannot trust him with the simple task of keeping his lips zipped until July—though he’s often blamed these crass tweets on his incompetent interns.

Regardless, Trump’s advisers may just have to accept the fact that Trump’s tweets cannot be tamed. Perhaps the internet will have the opportunity to partake in a friendly game of chance over the candidate’s potential VP slip.