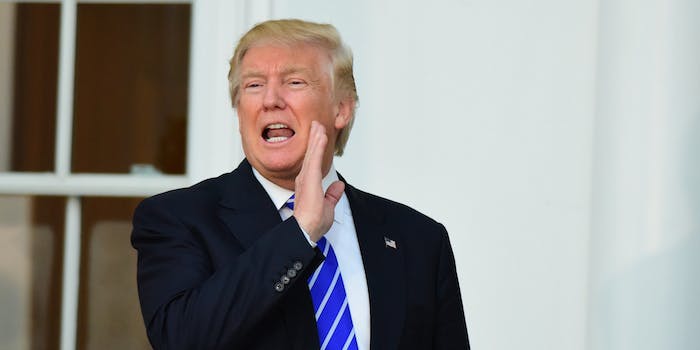 Is Donald Trump a cyberbully?

Donald Trump‘s use of Twitter to target private citizens who dare to counter his narrative has serious real-life consequences—for them, anyway.

On Friday, the Washington Post published the story of Lauren Batchelder, a college student in New Hampshire who last year questioned whether Trump was a “friend to women” during a political forum. “So, maybe I’m wrong, maybe you can prove me wrong, but I don’t think you’re a friend to women,” Batchelder, who was 18 at the time, said. Trump responded: “You’re going to make the same if you do as good of a job, and I happen to be pro-life, OK?”

After the forum, however, Trump tweeted that Batchelder was an “arrogant young woman” and a plant for the campaign of GOP primary challenger former Florida Gov. Jeb Bush.

The arrogant young woman who questioned me in such a nasty fashion at No Labels yesterday was a Jeb staffer! HOW CAN HE BEAT RUSSIA & CHINA?

How can Jeb Bush expect to deal with China, Russia + Iran if he gets caught doing a “plant” during my speech yesterday in NH?

Here’s what happened next, according to the Post: “Her phone began ringing with callers leaving threatening messages that were often sexual in nature. Her Facebook and email inboxes filled with similar messages. As her addresses circulated on social media and her photo flashed on the news, she fled home to hide.”

Batchelder has continued to endure abuse from Trump supporters. Just days before the election, she reportedly received a Facebook message that read: “Wishing I could fucking punch you in the face. id then proceed to stomp your head on the curb and urinate in your bloodied mouth and i know where you live, so watch your fucking back punk.”

Others reportedly threatened Batchelder with rape and posted pictures of her face digitally altered to be vulgar.

Trump, now president-elect, boasts a Twitter following of more than 17 million accounts, a jump of over 12 million since he tweeted about Batchelder. In that time, he has targeted hundreds of businesses, journalists, publications, and ordinary people.

Early this week, Trump tweeted that he would cancel a contract with Boeing related to the construction of new Air Force One aircraft. The tweet, which came just minutes after Boeing’s CEO was quoted questioning Trump’s approach to U.S.–China relations, sunk Boeing’s stock price for much of the day, resulting in hundreds of millions of dollars in losses for investors.

A few days after the Boeing tweet, Trump attacked an Indiana union leader who said the president-elect lied about the number of jobs he saved in a deal with United Technologies, parent company of Carrier, which produces air-conditioning and heating devices.

Chuck Jones, president of United Steelworkers 1999, said he received a number of threats against himself and his family after Trump’s tweets.

“I’ve been doing this job for 30 years. In that time, people have threatened to shoot me, to burn my house down,” Jones wrote in an op-ed for the Washington Post. “I’m not a macho man, but I’m just used to it.”

As for Batchelder, she hopes Trump will stop using his powerful platform on Twitter to single out critics.