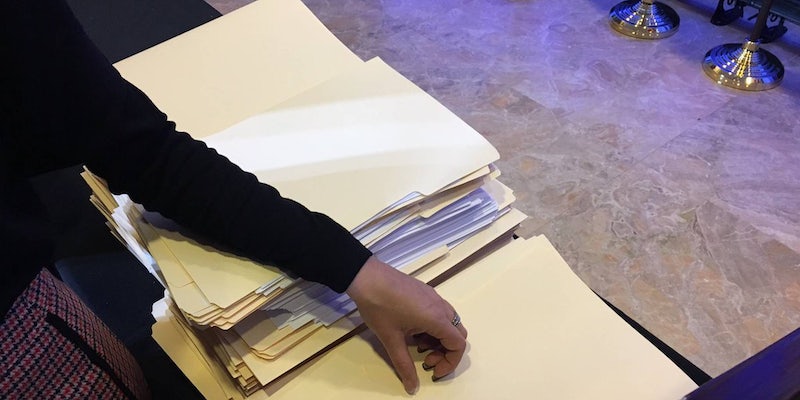 At his first press conference in nearly six months Wednesday, Donald Trump blasted CNN as “fake news,” reportedly paid staffers to jeer at reporters, said he wouldn’t release his taxes, and brought out dozens of folders that apparently contained the details on how he would separate himself from his businesses so that he wouldn’t be inaugurated as a president with any conflicts of interest.

He also wouldn’t let any reporter see what was actually inside the stacks of manila folders. And there might be a good reason why. Whatever was contained in those folders probably wouldn’t satisfy ethics experts, anyway.

Update: The Trump team did not allow the press to see the contents of the folders. Photo by Noah Gray/CNN pic.twitter.com/zKc9fv3Sba

As Trump said, he would transfer his businesses to a trust (but not a blind trust) run by his sons, Donald Trump Jr. and Eric Trump. But he said he won’t sell his stake in the Trump Organization. Trump also said he wouldn’t talk to his sons about the business. If he installed a blind trust, Trump would have absolutely no control over his business. Even if he says he won’t talk to Donald Jr. and Eric about the business, that doesn’t mean he won’t—and that means he still could profit off the presidency.

“Tragically, the Trump plan to deal with his business conflicts announced today falls short in every respect,” Norm Eisen, who led ethics initiatives in President Obama’s first term, told CNN. “Mr. Trump’s ill-advised course will precipitate scandal and corruption. I and many others will respond strongly in defense of ethics and our Constitution.”

But none of that bothers Trump.

Yet, there’s no way for him to prove that, because he didn’t let anybody see what was in the folders. Which begs the question: Were there actual documents in there? Or just blank sheets of paper?

Trump's proof that he's ethical is this stack of folders that he's not letting anyone look at pic.twitter.com/ZGxnnWNw7r

The pages are blank. pic.twitter.com/agLqnBTjrg

No folder labels. Contracts have page numbers. The paper is the wrong size (not legal size). No stickies, etc.

Am I the only one who doesn't care if #Trump's folders were props yesterday? I'd be more worried if he brought sensitive documents with him

But that could be one way for Trump’s cybersecurity measures to succeed. Don’t use computers or the internet. Just use pieces of paper clipped together in a manila envelope.