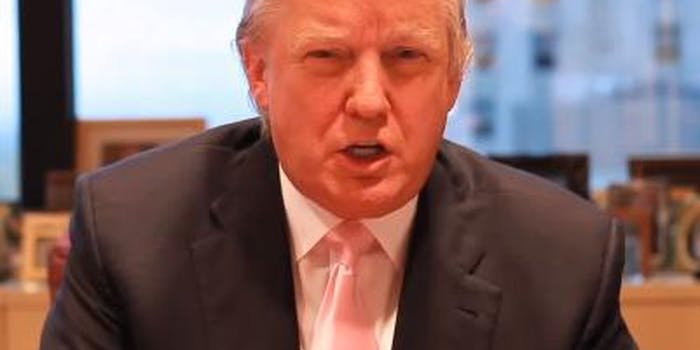 The business mogul promised in a new YouTube video that he would donate $5 million to the president's charity of choice if he releases more personal information.

In what might be considered the greatest troll of this election season, Donald Trump announced today that he will donate $5 million to President Barack Obama’s charity of choice if he releases more personal information.

In a video post on YouTube, the businessman calls Obama the “least transparent president in history” and asks him to release his college records and passport information.

“If he releases these records it will end the question, and indeed the anger, of many Americans,” Trump says in the video, which has been stuck at 321 views, an indication that YouTube cannot keep up with its popularity.

News of Trump’s announcement was already a trending topic on Twitter this morning before the release, as rumors circulated as to what Trump had to say.

“I’m a trump fan and a Romney supporter and I have say that’s one of the stupidest things I’ve heard in a while,” Ernie Hillebrandt commented on Facebook. “Why not take the 5 mil and hire someone to get the docs for you if you really think it will change anything at this point. Or spend some of that money campaigning for Romney and just vote the man out. That’s was really laughable you should have it deleted as fast as you can.”