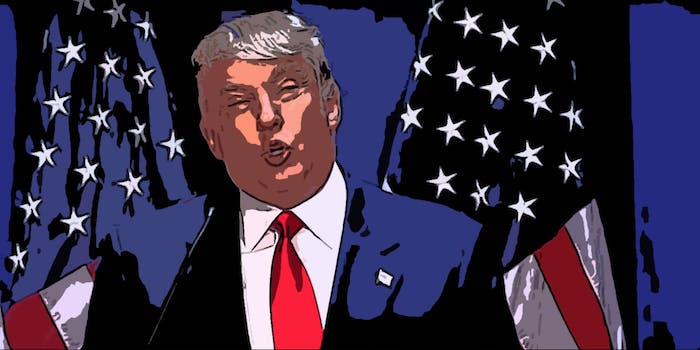 15 tweets to prove Donald Trump is completely indistinguishable from parody

Donald Trump is running for president, and I shouldn’t be writing this. The Daily Dot just published a story by Aaron Sankin in which correctly he argues that no one, including us, should cover Trump at all. It’s indisputable that the Trump lowers the discourse. He adds nothing. Only the figurative version of literal crap comes from his mouth. He’s offensive to the vast majority of Americans and people around the world, and for the vast majority of those he doesn’t offend, he’s an utter parody of their values. He’s sexist, he’s a boob, and his hair is stupid. We know all this, and I’m making it worse by treading water to repeat it.

And yet, because it’s funny—and because honestly, it’s the highest profile example of Poe’s Law I can think of, beating even Nancy Grace’s frantic Helen Lovejoy squeals and Sen. Chuck Grassley (R-Iowa)’s transcribed chewing noises—here are some of his tweets. Full disclosure: These tweets came almost entirely from Trump’s Favstar account, which tracks his most famous tweets. In other words, yes, the main reason people follow him is because he says shit like this.

In no particular order, here is the Donald:

If Obama resigns from office NOW, thereby doing a great service to the country—I will give him free lifetime golf at any one of my courses!

He’s just getting warmed up.

Here he blames President Obama for not saving America by shutting down tons of flights because there was Ebola in Africa.

President Obama – close down the flights from Ebola infected areas right now, before it is too late! What the hell is wrong with you?

Something very important, and indeed society changing, may come out of the Ebola epidemic that will be a very good thing: NO SHAKING HANDS!

It must have been President Obama that called in what will go down as the DUMBEST PLAY IN THE HISTORY OF FOOTBALL. Same thought process!

It’s not illegal to use someone’s name in a song. That’s not a thing in America.

Little @MacMiller, you illegally used my name for your song “Donald Trump” which now has over 75 million hits.

He is so often literally indistinguishable from the archetype of the racist uncle.

Our great African American President hasn't exactly had a positive impact on the thugs who are so happily and openly destroying Baltimore!

In his mind, he has somehow conflated patriotic days with other people being losers.

“@realDonaldTrump: I would like to extend my best wishes to all, even the haters and losers, on this special date, September 11th.”

I would like to wish everyone, including all haters and losers (of which, sadly, there are many) a truly happy and enjoyable Memorial Day!

Literally like a parody account, he tweets variants of the same damn “Hope, Jobs, and Cash” shit over and over again like nobody will notice, even sort of retweeting people who are making it a meta-joke. I dunno, man.

"@chiIIdog: @realDonaldTrump ten years ago, we had steve jobs, bob hope, and johnny cash. now, we have no jobs, no cash, and no hope."

"@ryelki: @realDonaldTrump @SStew3 WE HAVE NO JOBS, NO HOPE AND NO CASH. TEN YEARS AGO WE HAD SOME OR ALL OF THOSE THINGS" Interesting!

"@DeadlyKittenz: @realDonaldTrump when you are president will you be able to bring back hope, jobs, and cash? #trump2016" We have no choice

"@MooseJawnski: @realDonaldTrump bring Cash, Jobs, and Hope back to America and run for president!!" Not much hope in our Country right now

I am officially running for President of the United States. #MakeAmericaGreatAgain https://t.co/Ct0lNu7kz0