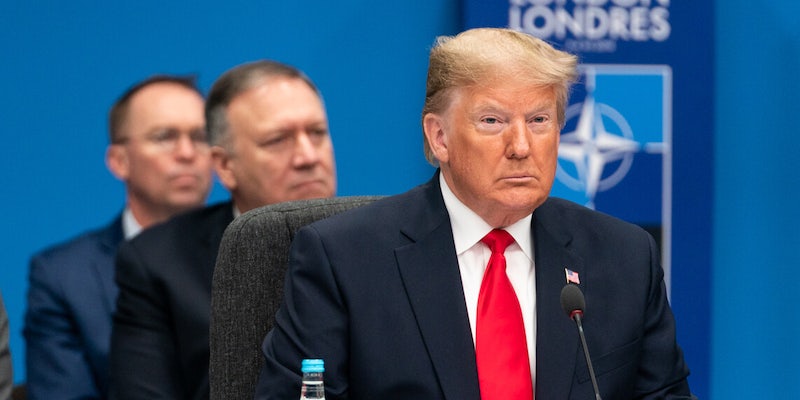 In the letter, Trump compares how he has been treated to the Salem Witch Trials.

President Donald Trump sent a scathing letter to House Speaker Nancy Pelosi (D-Calif.) on Tuesday denouncing the impeachment proceedings in the House of Representatives ahead of its expected vote on Wednesday.

In the six-page letter, Trump says he wants to express “my strongest and most powerful protest against the partisan impeachment crusade,” and adds that he believes Pelosi and the Democrats have “cheapened the importance of the very ugly word, impeachment!”

“Everyone, you included, knows what is really happening,” the president’s letter reads. “Your chosen candidate lost the election in 2016, in an Electoral College landslide (306-227), and you and your party have never recovered from this defeat. You have developed a full-fledged case of what many in the media call Trump Derangement Syndrome and sadly, you will never get over it!”

“You have cheapened the importance of the very ugly word, impeachment!” POTUS writes to @SpeakerPelosi … pic.twitter.com/QP7cUbX7Ao

Trump also declares that “more due process was afforded to those accused in the Salem Witch Trials” than he has been given.

The president adds that he does not think the letter will change any votes in the House, but wanted his thoughts to be “on a permanent and indelible record.”

You can read all of Trump’s letter to Pelosi here.