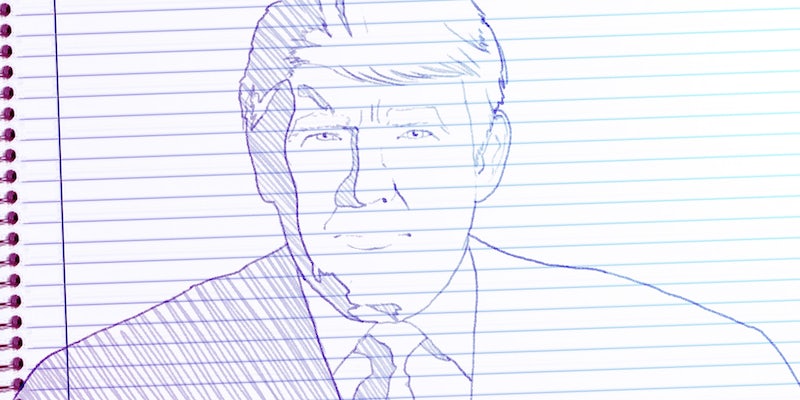 “You could see there was blood coming out of her eyes. Blood coming out of her… wherever,” Trump said on live TV. The businessman’s implication was clear: Kelly had been irrationally charged during the debate, and targeted comparatively harsh questions at Trump because she was on her period.

“I don’t respect her as a journalist,” Trump added. “She’s highly overrated.”

Proof positive of Kelly’s failure as debate moderator, Trump said, could be found on Twitter as he cited the opinion of “hundreds of thousands of people on Twitter… In the Twittersphere it’s been very bad… She’s a lightweight.”

On stage in Cleveland for the debate, Trump replied to Kelly’s question about his history of crude public comments directed at women by first attacking Rosie O’Donnell, and then Kelly: “And honestly Megyn, if you don’t like it, I’m sorry. I’ve been very nice to you, although I could probably maybe not be, based on the way you have treated me. But I wouldn’t do that.”

Since the debate—which has been heralded as a net positive for Trump—the outsider candidate has publicly fumed like a coach who uses every call against him to bark at the officiating. On Friday Trump’s official Twitter account was marked with many quoted retweets from supporters, most of them anti-Fox News and, particularly, Kelly:

"@RubenMMoreno: @realDonaldTrump The biggest loser in the debate was @megynkelly. You can't out trump Donald Trump. You will lose!

.@FrankLuntz is a low class slob who came to my office looking for consulting work and I had zero interest. Now he picks anti-Trump panels!

.@FrankLuntz, your so-called "focus groups" are a total joke. Don't come to my office looking for business again. You are a clown!

"@Resi_Diederich: @PlatinumRosie @realDonaldTrump @FoxNews @megynkelly is that all you've got??? Haha."

"@Reid2962: @realDonaldTrump @FoxNews I expected better from @megynkelly, wondering what is her hidden agenda.

"@italy2320: @Reid2962 @FoxNews @megynkelly Tell me what I can do to help you. She really has made me want to never watch fox again"

.@realDonaldTrump: That [pledge] question was aimed at me, which I didn't think it was appropriatehttps://t.co/GWLg8BRcOc

Top Trump attorney Michael Cohen also stirred the pot when he retweeted the following, according to Politico: “#boycottmegynkelly @realDonaldTrump we can gut her.”

Trump’s CNN shot is likely to draw criticism for sexism, though whether or not Trump’s polling numbers suffer for it remains to be seen. His attack on Sen. John McCain’s (R-Ariz.) military record met rampant criticism, after all, but only seemed to rally the elected Republican officials he’s already campaigning against.