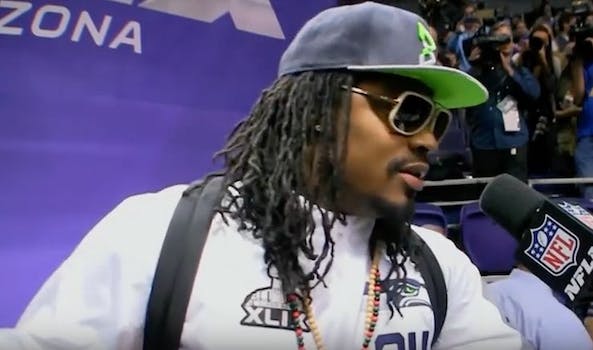 It's the second straight day Trump has blasted Black athletes.

Less than a day after Trump tweeted he should have left three UCLA basketball players in jail in China because one of their fathers wasn’t grateful for Trump’s help, Trump blasted Lynch.

Marshawn Lynch of the NFL’s Oakland Raiders stands for the Mexican Anthem and sits down to boos for our National Anthem. Great disrespect! Next time NFL should suspend him for remainder of season. Attendance and ratings way down.

The Raiders played the New England Patriots in Mexico City on Sunday, which is why both countries’ national anthems were played. Lynch stood for one, but took a seat for the other.

Marshawn Lynch sits during the US national anthem, stands for Mexican anyhem pic.twitter.com/8wdaKprEki

Since returning from retirement at the beginning of this season, Lynch has declined to stand for the national anthem. Lynch was suspended for one game earlier this year for making contact with an official.

Lynch doesn’t speak much with the media but when asked about Colin Kaepernick’s national anthem protests last year, Lynch said, “With what’s going on, I’d rather see him take a knee than stand up, put his hands up, and get murdered. And if you’re really not racist then you won’t see what he’s doing as a threat to America, but just addressing a problem that we have.”

The NFL has declined to make it mandatory for players to stand during the anthem, and the league owners and the players recently decided that the best way to handle Trump’s tweets on the matter was simply to ignore them.