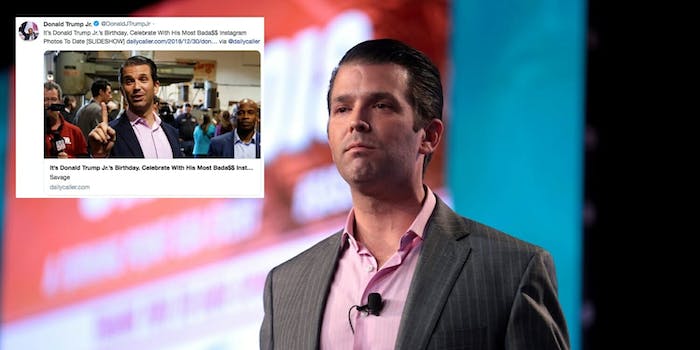 Did you know it was Donald Trump Jr.’s birthday? Well, per the puff piece he shared, he’d like you to celebrate him by checking out a slideshow of his most “Bada$$” Instagram pictures.

That’s right, in what is a late entry for the saddest and bleakest tweet of the year, the president’s son tweeted a link to a Daily Caller post that was flattering of him and his “pretty fire Instagram.”

The not-so-extraordinarily “Bada$$” slideshow includes several images of the president’s son on trophy hunting expeditions, fishing, and with family.

Trump Jr., who turned 41 years old on Monday, made no other mention of his birthday on the platform other than this tweet. But he found little congratulations or celebration online.

Instead, some users said it came across as a tragic and desperate.

Quite possibly the saddest thing I’ve ever seen on Twitter

Others offered no credit, blasting him as a straight-up attention-seeking egotist.

Like many of his tweets, this one was followed up by an avalanche of memes and tweets telling him how he would be behind bars soon.

Enjoy! It could be your last not behind bars!

Trump Jr., of course, emerged as a person of interest to federal investigators exploring allegations of collusion over a 2016 meeting he had with Russian nationals promising compromising material on his father’s then-rival Hillary Clinton.

His potential indictment has long been speculated about, although nothing has currently materialized.