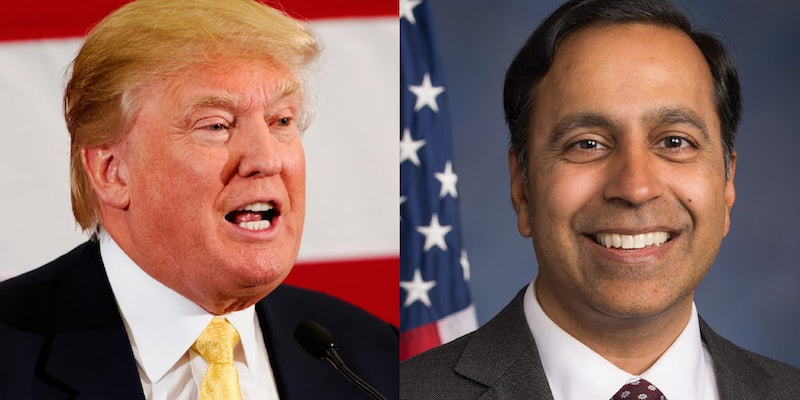 Sean Spicer has refused to deny the existence of recording devices in the White House.

A Democratic member of the House Oversight Committee has asked the White House to turn over any recordings President Donald Trump has of conversations between him and ousted FBI Director James Comey.

“Earlier this morning, President Trump wrote a tweet referencing his taping of high-level conversations in the White House. In light of this revelation, I would respectfully request that the White House Counsel provide the House Oversight Committee with all tapes of the President’s communications with former FBI Director James Comey, of President Trump’s meeting with Russian officials which was closed to American press but not their Russian counterparts, and of any conversations regarding the hiring or firing of former National Security Advisor Michael Flynn,” Krishnamoorthi said in a statement.

Trump’s surprise firing of Comey on Tuesday rang alarm bells across the political spectrum due to the FBI’s ongoing investigation into Russia’s attempts to influence the 2016 presidential election, which includes probes into ties between Trump associates and Russia.

Former National Security Adviser Michael Flynn was forced to resign in mid-February after reports revealed he misled Vice President Mike Pence regarding the nature of his contact with Russian Ambassador Sergey Kislyak. Flynn is one of more than a dozen Trump associates with known ties to Russian officials or other prominent figures, according to the Washington Post.

During Friday’s White House press briefing, Press Secretary Sean Spicer refused to answer whether there are recording devices in the White House. Asked whether Trump had recorded conversations, Spicer said, “The president has nothing further to add on that.”

Speaking with CNN on Friday, an unnamed source close to the former FBI director reportedly said that Comey is “not worried about any tapes,” adding that “if there is a tape, there’s nothing he is worried about.”

Read Kirshnamoorthi’s letter to McGahn below: