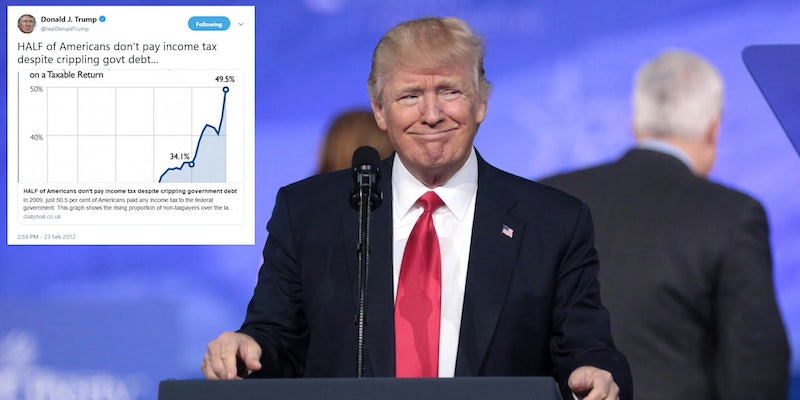 The tweet resurfaced in the wake of a New York Times report.

A tweet sent by now-President Donald Trump in 2012 pointing out that many Americans don’t pay their income tax resurfaced after a New York Times report published on Tuesday.

The Times found that more than decade ago, the president was able to legally avoid paying income taxes because of declared losses.

As the investigation puts it:

The numbers show that in 1985, Mr. Trump reported losses of $46.1 million from his core businesses — largely casinos, hotels and retail space in apartment buildings. They continued to lose money every year, totaling $1.17 billion in losses for the decade.

In fact, year after year, Mr. Trump appears to have lost more money than nearly any other individual American taxpayer, The Times found when it compared his results with detailed information the I.R.S. compiles on an annual sampling of high-income earners. His core business losses in 1990 and 1991 — more than $250 million each year — were more than double those of the nearest taxpayers in the I.R.S. information for those years.

The report goes on to detail that Trump lost enough money that he was able to avoid paying income taxes eight times from 1985 through 1994.

But in 2012, the president tweeted a link to a Daily Mail story, apparently just copy-and-pasting the headline:

“HALF of Americans don’t pay income tax despite crippling govt debt…” Trump wrote at the time, linking to the story.

Given the nature of the story, Trump’s old tweet about Americans not paying income taxes found a new life.

Maybe the debt would be a little less crippling if not for your business failures that enabled YOU to pay zero income tax for decades. https://t.co/ixDxxjc36z

This morning on Twitter, the president bashed the story as inaccurate, while also defending the practices outlined in it.

Real estate developers in the 1980’s & 1990’s, more than 30 years ago, were entitled to massive write offs and depreciation which would, if one was actively building, show losses and tax losses in almost all cases. Much was non monetary. Sometimes considered “tax shelter,” ……

….you would get it by building, or even buying. You always wanted to show losses for tax purposes….almost all real estate developers did – and often re-negotiate with banks, it was sport. Additionally, the very old information put out is a highly inaccurate Fake News hit job!

Take that as you will.