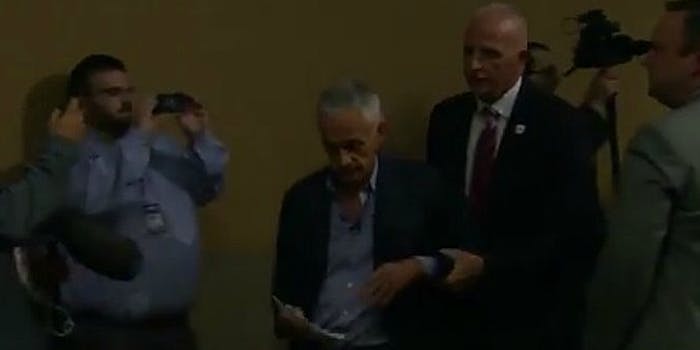 While taking questions at a press conference in Iowa on Tuesday, Republican presidential primary contender Donald Trump helped get Jorge Ramos escorted out of the building as the Univision anchor was asking questions.

As we’ve documented here, Trump doesn’t have a great relationship with the Hispanic community—the latest polls show him with an unsightly negative-51 percent favorability gap among Latino voters—so browbeating and then kicking out the longtime American face of Spanish-language news doesn’t seem like a great way to narrow the gap.

And maybe instructing Ramos to “go back to Univision” won’t help him either. Here’s the video of the unfriendly encounter.

As Politico wrote after the event:

Ramos in recent weeks has accused the Republican presidential candidate of “spreading hate” with his rhetoric on immigration.

Security officers physically escorted Ramos out of the event, with Trump saying it wasn’t anything personal. “I don’t mind if he comes back,” Trump said, adding, “He is obviously a very emotional person.”

Ramos was allowed back in minutes later, and proceeded to pepper the loud-mouthed billionaire businessman with questions about his comments about “anchor babies,” his plans to build a giant wall along the U.S.-Mexico border, and Trump’s assertion that many Mexican immigrants are criminals.

While he was gone, Trump also denied that he was the one who kicked out Ramos.

“I didn’t escort him out. You have to talk to security, you’re asking me questions, he just stands up and starts screaming,” Trump said. “Maybe he’s at fault also. Somebody walked him out. I don’t know where he is, I don’t mind if he comes back. …I would take his question in two seconds but he stood up and started screaming.”

It also should be noted that Trump—who has talked about wanting to deport all 11 million illegal immigrants and who has railed against so-called anchor babies—has filed a $500 million lawsuit against the network for canceling its plans to air the Trump-owned Miss Universe contest. But Trump also said that the Latino community is one big Trump fan.

But here’s perhaps one reason why Trump wasn’t interested in talking to Ramos at first. Hours before the press conference, this was what Ramos tweeted.

Jorge Ramos on Trump: This is personal @CNN http://t.co/7R1ccYNB7a

After a while, Trump did answer Ramos’s questions — you can see his transcribed answers here.

While Tuesday’s stunt wasn’t altogether surprising, it does beg the question: When compared to Trump, how would Atticus Finch or Mr. Burns rank among this country’s Latino voters?