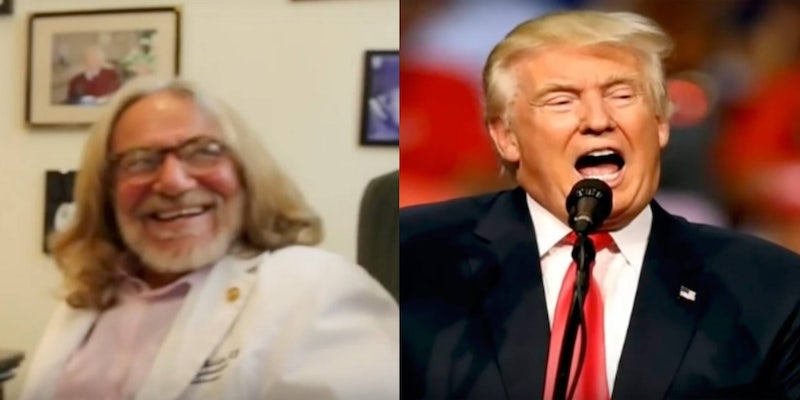 Donald Trump’s doctor stands by his statements, will probably vote for him

Dr. Harold Bornstein's credibility has been called into question yet again.

There were some strange circumstances surrounding Dr. Harold Bornstein’s note proclaiming that Donald Trump would be “the healthiest individual ever elected president.”

In an exclusive interview with NBC News, the controversial gastroenterologist tells all. According to Bornstein, he had a limo waiting on him—sent by Trump, of course—and wrote the note in just five minutes.

“I thought about it all day and in the end… I get rushed and I get anxious when I get rushed so I try to get four or five lines down as fast as possible so they would be applicable,” Dr. Bornstein explains, a blurry camera still able to capture his palpable anxiety.

That camera also appeared to catch a desktop computer running Windows XP. According to his wife, the device contains no medical files and those that Dr. Bornstein does have are all stored offline.

The interview nonetheless detailed quite the anomaly. Dr. Bornstein readily admitted that this wasn’t what he normally does for patients, signaling a bizarre favoritism that may influence how he votes come the general election. “I like Donald Trump because I think he likes me,” Bornstein said of the Republican nominee.

Dr. Bornstein is registered to vote in Westchester County and has no political party affiliation, according to the New York State Board of Elections. So, he can technically show love to his favorite hyperbolic patient.

Prior to being thrust in the spotlight due to the GOP nominee, the doctor’s controversies were few and far between. He faced a lawsuit stemming from the 2000 death of a patient, allegedly due to overmedication. That suit was settled in 2006. Dr. Bornstein now faces scrutiny for the public over a shoddy letter teeming with typos with language reminiscent of the Donald, of which he has no apologies.