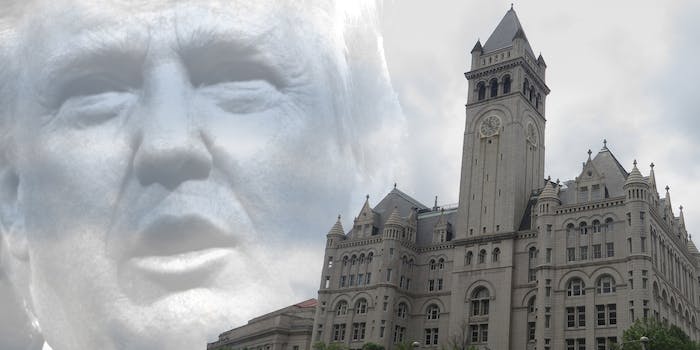 Trump hasn't said how he plans to handle the impending conflict of interest.

Democrats have begun exerting increased pressure on President-elect Donald Trump over a conflict of interest arising from his ownership stake in a luxury Washington D.C. hotel.

The building now known as the Trump International Hotel is owned by the federal government and was leased to the Trump Organization in 2013; however, a clause in the contract forbids the property from being leased to an elected official. A group of four Democratic lawmakers have started to inquire as to how the General Services Administration (GSA), the agency that leased the building, plans to handle Trump’s potential breach of contract.

Trump’s lease dictates in plain English: “No member or delegate to Congress, or elected official of the Government of the United States … shall be admitted to any share or part of this Lease, or to any benefit that may arise therein.”

BuzzFeed News, which published a letter from the Democrats on Wednesday, reports that the GSA would typically bring the dispute before an independent tribunal. Trump’s transition team, however, has reportedly failed to respond to the GSA’s inquiries concerning the property.

A portion of the letter, authored by Democratic Reps. Elijah Cummings (Md.), Peter DeFazio (Ore.), Gerald Connolly (Va.), and Andre Carson (Ind.), reads: “When our staffs asked if GSA attempted to contact Mr. Trump or his associates about this issue, the Deputy Commissioner stated that GSA informed the Trump transition team about concerns raised by us and others about the imminent breach, but that GSA has heard nothing in response to date.”

The GSA later pushed back against the Democrats’ claims, telling CNBC in a statement that it is premature to make determinations about Trump’s legal obligation in the matter.

“We can make no definitive statement at this time about what would constitute a breach of the agreement, and to do so now would be premature,” a GSA spokesperson said. “In fact, no determination regarding the Old Post Office can be completed until the full circumstances surrounding the president-elect’s business arrangements have been finalized and he has assumed office.”

Trump, who rightfully notes that he is not legally obligated to divorce himself from conflicts of interest arising from his vast business interests around the world, has so far refused to divest from his company and establish a blind trust to manage it. Instead, he reportedly plans to see his company’s holdings managed by his children, who have also assumed key positions on his White House transition team.