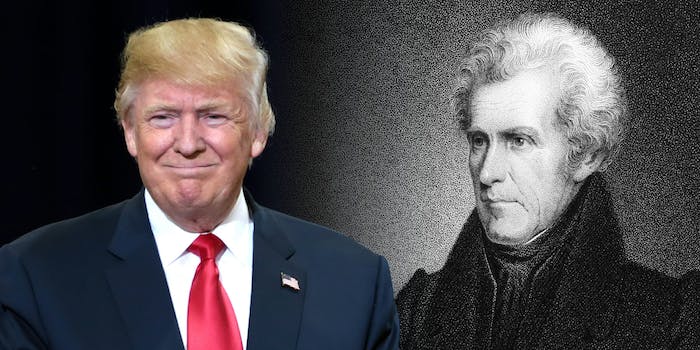 Why, the president wonders.

In an interview with Washington Examiner journalist Salena Zit0, which airs today on Sirius XM, President Donald Trump spoke about a comparison many have made between him and our seventh president, Andrew Jackson.

A number of people have noted similarities between Trump surprising run to the White House and Jackson’s, from the fiery populism that fueled their elections to their disdain for typical conventions and norms.

But then, Trump delved into an interesting tangent about the Civil War and… wondered why it happened.

Here's Trump's full answer on "swashbuckler" Andrew Jackson and the Civil War: "Why could that one not have been worked out?" pic.twitter.com/Zb8OQaDqyq

People have picked up on Trump saying Jackson was angry about what was happening with the Civil War, noting that Jackson died in 1845. But that is just how Trump speaks, and he was likely using the phrase ‘Civil War’ to refer to the lead-up to the Civil War, not the actual war itself, which did not begin until some 16 years after Jackson’s death.

It should most be apparent to our current president why ‘that one’ could not have been worked out.

Virtually the entirety of the 1800s was spent trying to resolve the conflict between the North and the South over slavery the issues surrounding it. Major efforts by the government—from the Missouri Compromise to the Kansas-Nebraska Act—helped stave off conflict for as long as possible, but almost every single historian agrees that a conflict was inevitable.

As to whether Jackson himself could have prevented the Civil War, well, Trump does have some sound reasoning. Jackson stopped South Carolina from seceding in 1832 over a conflict over tariffs enforced by the federal government.

That said, Jackson himself said South Carolina would try the same thing again, only the next time over slavery.

You can listen to the president’s comments below.