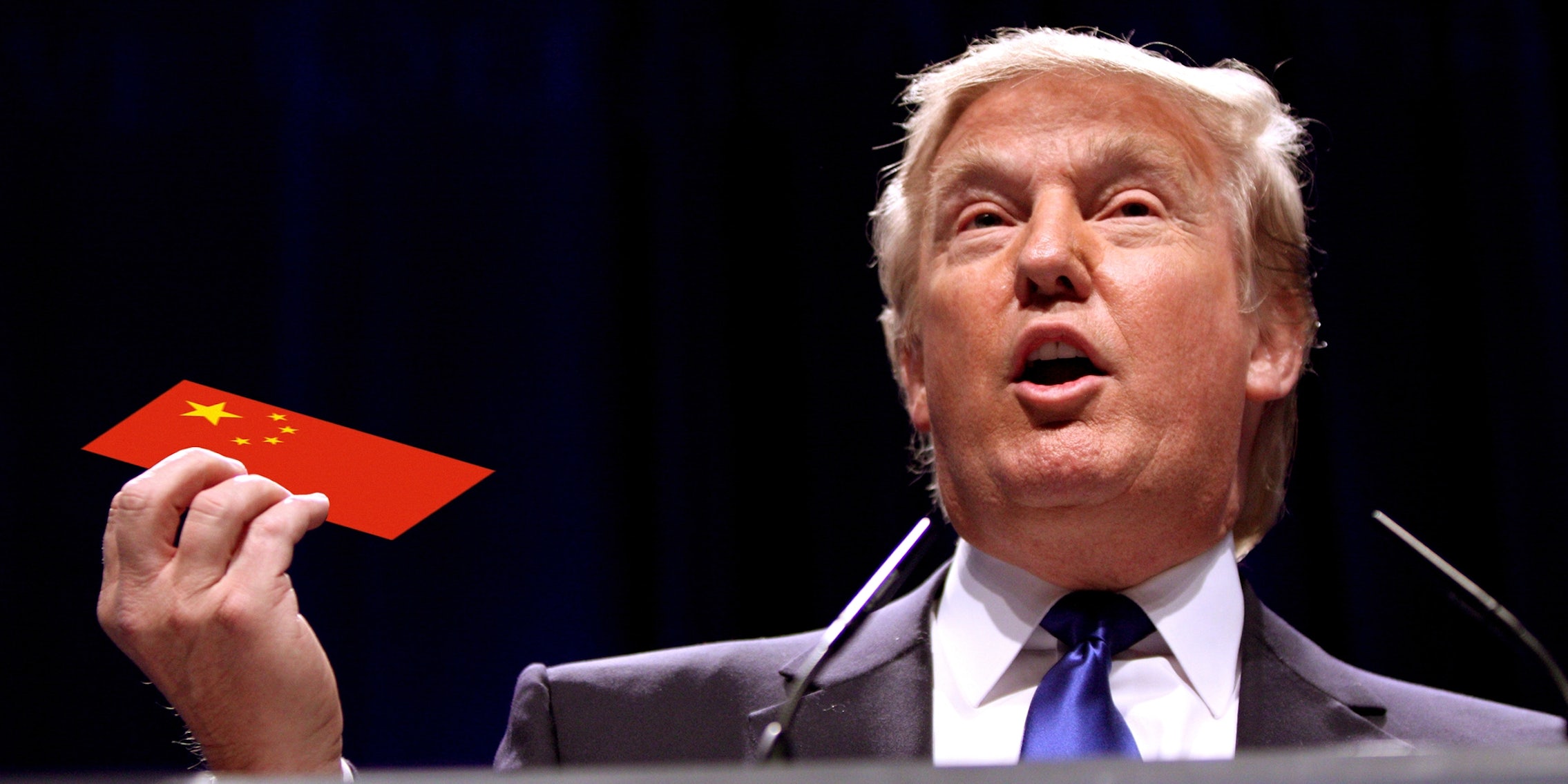 Over the last two days, opinion pieces for multiple Chinese media outlets have grilled the president-elect, taking to task his call with and tweets regarding Taiwan President Tsai Ing-wen. The call effectively ended nearly four decades of presidential protocol in acknowledging the “one China” policy.

Though China has called the phone call a “little trick” by Taiwan, their media hasn’t been quite been as forgiving, poking at Trump’s inexperience with satirical cartoons and slightly ominous headlines.

The Chinese media also took issue with a Trump’s tweets on China’s relations with the U.S.

Did China ask us if it was OK to devalue their currency (making it hard for our companies to compete), heavily tax our products going into..

their country (the U.S. doesn't tax them) or to build a massive military complex in the middle of the South China Sea? I don't think so!

Daily tabloid Global Times, run by the ruling Communist Party’s paper People’s Daily, published several opinion pieces since Trump’s tweets with headlines such as, “Trump will in time learn not to cross China,” and “Trump wants to treat China as a fat lamb… Forget about it!”

The former article reasoned that Trump’s call with Tsai signaled that the president-elect still had much to learn about the Sino-U.S. relationship, comparing Trump’s misstep to President George W. Bush‘s initial defense of Taiwan when he first took office.

“The world will be dragged into a mess if leaders all speak irresponsibly. This shouldn’t be allowed. Trump as future U.S. president should know what to say properly on different occasions,” the piece concluded.

The latter article, which ran with the printed headline “Trump in no position to be rash with China,” called Trump’s China-related tweets a “tantrum” designed to be a “China-bashing” cover-up for his intent to pillage other countries for U.S. economic success.

“Trump’s reckless remarks against a major power show his lack of experience in diplomacy,” the piece read.

A third Global Times op-ed called the president-elect “‘big-mouth’ Trump,” alongside an editorial cartoon of a panda holding up a protective shield against a spittle-talking president-elect. A news article from the same publication reported on the Chinese internet’s reaction to Trump’s tweets as well.

At ChinaDaily.com.cn, one opinion piece headline argued, “Some lessons in diplomacy would benefit Trump.” Again, the publication took issue with Trump’s inexperience, alluding to a cloudy relationship with China should the president-elect not straighten out in the future.

“As president-elect, Trump can expect some forgiveness even when he is shooting from the hip. But things will be different when he becomes president,” the piece reads. “To stop acting like the diplomatic rookie he is, the next U.S. president needs help in adapting to his forthcoming role change.”

Another publication, the Paper, took note of Trump’s lack of foreign relations in the political arena but argued that he’s still surrounded by other government officials who should have been able to inform him of U.S. relations with Taiwan. The article concluded by comparing Trump to Bush, too.

“Since the election, Trump has always avoided receiving intelligence briefings, which can not help but think of the first few months of 2001, George Bush ignored the warning about Osama bin Laden,” the article reads when translated through Google Chrome.

Given China’s notoriety for being one of the most restrictive countries on press freedom while jailing journalists, bloggers, and civil rights lawyers, these opinion pieces, even outside of Global Times, may primarily represent the views of the Chinese government.

But they are telling, nonetheless. According to South China Morning Post, White House spokesman Josh Earnest said senior National Security Council officials spoke twice with Chinese officials since Friday to “reiterate and clarify the continued commitment of the United States to our longstanding China policy.”

“The Chinese government in Beijing placed an enormous priority on this situation, and it’s a sensitive matter,” Earnest said. “Some of the progress that we have made in our relationship with China could be undermined by this issue flaring up.”