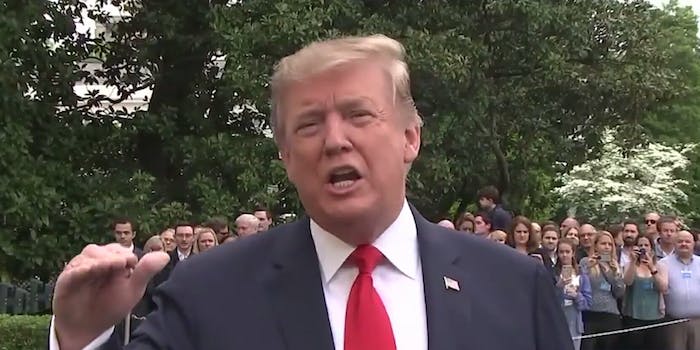 He was referring his 2017 remarks that were widely criticized.

President Donald Trump said on Friday that his remarks in the wake of the violent white supremacist rallies in Charlottesville, Virginia in 2017 were answered “perfectly.”

The president was asked about his remarks—where he said there were “very fine people” among the rally goers and counter protests—after former Vice President Joe Biden highlighted them as part of his 2020 presidential primary bid.

“If you look at what I said, you will see that that question was answered perfectly,” the president told reporters. “I was talking about people that went because they felt very strongly about the monument to Robert E. Lee, a great general. Whether you like it or not, he was one of the great generals.”

He claims the 'very fine people' remark was about people who "felt very strongly about the monument to Robert E. Lee. A great general, whether you like it or not."
Via Politico pic.twitter.com/01W4IwGx8y

The president’s remarks track with some of the right who have tried to argue that the presidents “very fine people” remarks were taken out of context and have been blaming the media for the coverage of Trump after the event.

However, as the Washington Post points out, the rally was organized by well-known white supremacists. During part of the protests they shouted, “Jews will not replace us.”