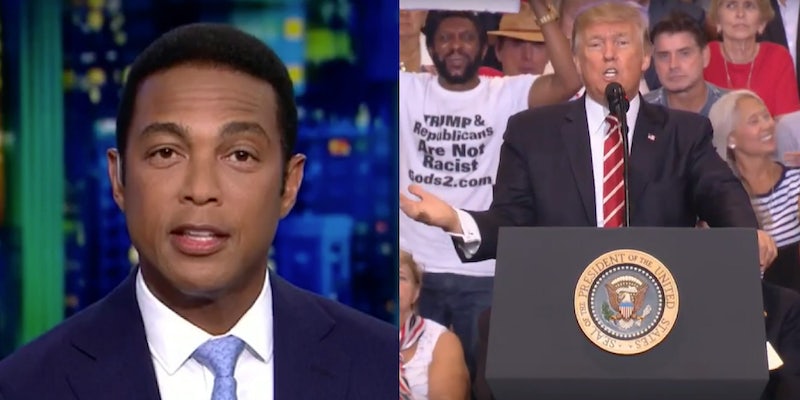 'What we’ve witnessed is a total eclipse of the facts.'

“Well…” Lemon began, seemingly at a loss for words. “What do you say to that?”

Thus began one of the most pointed reactions to Trump’s 75-minute speech, during which the president tried to set the record straight on his comments about white supremacist demonstrators in Charlottesville, Virginia, while excluding his most inflammatory comments; lied about the media cutting their feeds of his speech when he attacked them as “dishonest”; and vowed to shut down the federal government to get funding for his U.S.–Mexico wall.

In many ways, Trump’s speech was a typical throwback to his 2016 campaign rallies. But for Lemon and others on his CNN panel, it was a ghastly showing from the president of the United States.

“What we have witnessed was a total eclipse of the facts,” CNN’s Don Lemon says after Trump’s rally in Phoenix https://t.co/KxdoNGxO2v

“I’m just going to speak from the heart here,” Lemon began. “What we’ve witnessed is a total eclipse of the facts—someone who came out onstage and lied directly to the American people and left things out that he said in an attempt to rewrite history, especially when it comes to Charlottesville.”

“He’s unhinged. It’s embarrassing. I don’t mean for us, the media, because he went after us—but for the country. This is who we elected president of the United States, a man who’s so petty he has to go after people who he deems to be his enemies like an imaginary friend of a six-year-old. His speech was without thought. It was without reason. It was devoid of facts. It was devoid of wisdom. There was no gravitas. There was no sanity there. He was like a child blaming a sibling on something else. ‘He did it. I didn’t do it.’

“He certainly opened up the race wounds from Charlottesville, a man clearly wounded by the rational people who are abandoning him in droves, meaning those business people and the people in Washington now who are questioning his fitness for office and whether he is stable—a man backed into a corner, it seems, by circumstances beyond his control and beyond his understanding.”

Although Trump’s speech elicited moments of enthusiasm from his crowd—chants of “USA! USA!” and cheers for his attacks on the media—hundreds of supporters left the speech early as Trump continued to rant and ramble on a vast range of topics, the Washington Post reports.