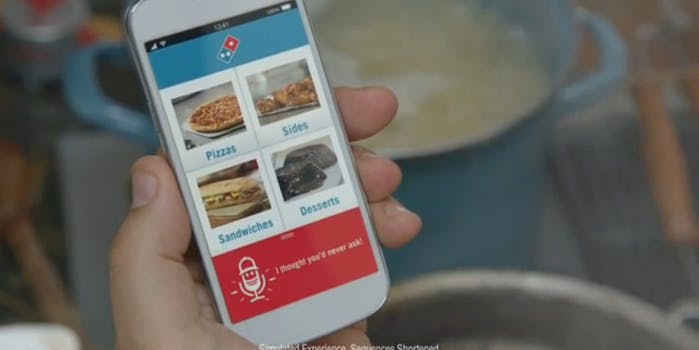 ‘Dom’ is the voice-activated pizza ordering system from Domino’s

Siri has some competition.

Domino’s has added Siri-like features to its mobile apps, and it’s ready for the world to know about it. If you watch the NFL tomorrow, you will see the first advertisement for the new feature, which the company has dubbed “Dom.”

Dom allows you to order pizza simply by asking for it, instead of tapping through a series of menus. Dom—which has been in beta since June—responds to questions with quips about pizza, a feature that may get old quickly.

Dom can to take your carry out or delivery order, suggest additions to your order, and even find coupons for you. Domino’s built the voice-ordering service with Nuance Communications, a longtime staple in voice recognition.

Speaking to the Daily News, Domino’s president and CEO Patrick Doyle said, “Mobile customers are not only going to love the ease of this landmark ordering experience, but they now have the opportunity to have some fun with Dom himself, who has a few more things to say than before.”

Dom is available now in the App Store and Google Play.