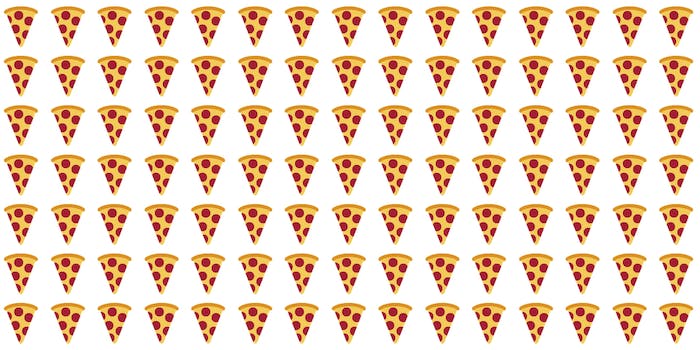 Get ready to order a Domino’s pizza with emoji

The best way to order a pizza ever.

Emoji are useless for a great many things, and now they’re useful for one: pizza. Take-out, phone calls, online orders, and even a dedicated app simply aren’t enough for Domino’s, and the popular chain has decided to take laziness to the next level by letting you order with emoji—the pizza emoji, specifically.

Order verification is completed via a direct message, and after that’s done your meal is readied for delivery. Domino’s will use the saved credit card information on your Domino’s account to complete your transaction.

Domino’s teased the announcement by spending a large portion of their day tweeting nothing but pizza emoji to its 800,000 Twitter followers before eventually linking to the announcement in a USA Today news article.

Whatever your feelings about #brands and social media, you have to admit that it’s a pretty clever way to leverage Twitter for IRL interactions. There are no details yet about an international pizza-emoji-order rollout, but anyone in the U.S. might want to start emotionally preparing now.