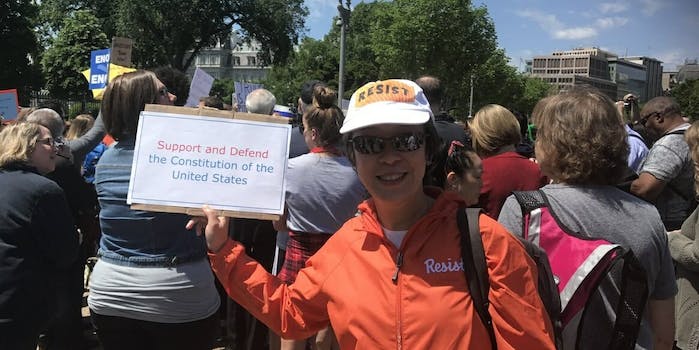 Hui Chen had been an outspoken critic of the Trump administration prior to her resignation.

A corporate crime watchdog who resigned in June from the Department of Justice says she could not continue to work under President Donald Trump when he exhibited the kind of conduct she would not tolerate from corporations.

“Trying to hold companies to standards that our current administration is not living up to was creating a cognitive dissonance that I could not overcome,” Hui Chen wrote in a recent LinkedIn post of her resignation, titled “Mission Matters.”

“To sit across the table from companies and question how committed they were to ethics and compliance felt not only hypocritical, but very much like shuffling the deck chair on the Titanic,” Chen continued.

The former corporate lawyer and federal prosecutor, who had independently worked under contract with the Justice Department’s Criminal Division since 2015, investigated instances of fraud and compliance.

Chen had come to the attention of the media in late May over a series of tweets she published from her personal Twitter account that were increasingly critical of the Trump administration. Chen also posted photos of herself protesting Trump on Capitol Hill.

At a lunchtime rally yesterday at the Capitol, #NancyPelosi called out my sign twice: as "the oath we all took" and call to action! pic.twitter.com/n9fANHwmsT

At the time, Chen’s posts sparked debate over how government employees should conduct themselves online.

Michael Gallion, a partner in Kelley Drye & Warren’s labor and employment group in Los Angeles, told Law.com that Chen’s tweets were “inappropriate for someone in her position” and that they called into question her professional judgment. He went on to warn that although the government could choose to end her contract, “she could file a wrongful termination or retaliation suit if she is let go.”

It seems, however, that Chen chose to step away from the contract herself.

“Even as I engaged in those questioning and evaluations, on my mind were the numerous lawsuits pending against the President of the United States for everything from violations of the Constitution to conflict of interest, the ongoing investigations of potentially treasonous conducts, and the investigators and prosecutors fired for their pursuits of principles and facts,” she continued in the post.

“Those are conducts I would not tolerate seeing in a company, yet I worked under an administration that engaged in exactly those conduct. I wanted no more part in it.”