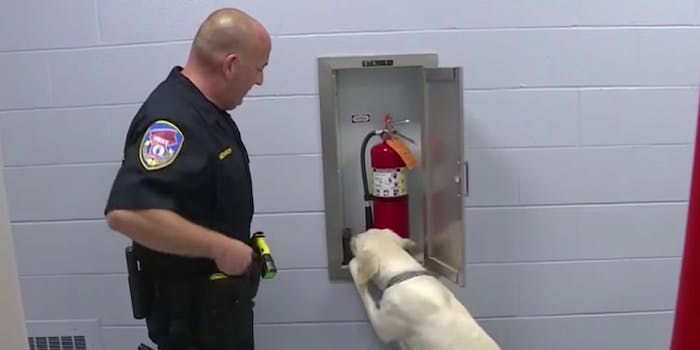 How good doggos are sniffing for cybercrime evidence

An elite subset of canines can smell a chemical in hard drives.

Law enforcement agencies across the country employ K9 units for sniffing out drugs, bomb materials, or missing persons. However, over the past few years, a small, elite group of dogs has emerged to suss out a different kind of threat: cybercrime.

Specifically, these dogs are trained for electronic storage detection, CNET reported Monday. They sniff out a chemical compounds known as TPPO, short for triphenylphosphine oxide. This odorless-to-humans compound is present in all manner of electronic storage devices, from SD cards and USB drives to computer hard drives. While humans can’t smell it, dogs have sensitive enough olfactory cells that they can be trained on the scent.

The ability to sniff out these devices can be important in a variety of criminal cases and even paramount in convicting a felon. Such devices can store evidence of financial crimes, child pornography, or hidden phone or text records. The first case where a dog was used to sniff out ESD evidence was in 2014.

CNET’s Alfred Ng followed a training exercise with Harley, a golden retriever that works alongside Detective Brett Hochron of the Westchester County Police in New York.

The Connecticut State Police pioneered the program and began holding classes to train dogs beginning in 2016. As of February, there are now 17 trained electronic storage detection dogs in the U.S., according to CNET.

Unlike other types of service and guide dogs, dogs sniffing out electronics need to be bold, inquisitive, energetic, and motivated by food (these dogs get food as a reward for their successful electronic storage device sniffing). Labrador retrievers often make good electronic storage detection dogs due to their personalities and superior scent-tracking abilities.

When dogs like Harley detect TPPO, they sniff the area, drool, wag their tail, and pace in the area until the device is found. Then the dog gets her treat, aka a handful of kibble. The dogs go on training exercises daily because the only time they’re fed is when they successfully find an electronic device.

For more details about Harley and how electronic storage detection pups are trained, head over to CNET.