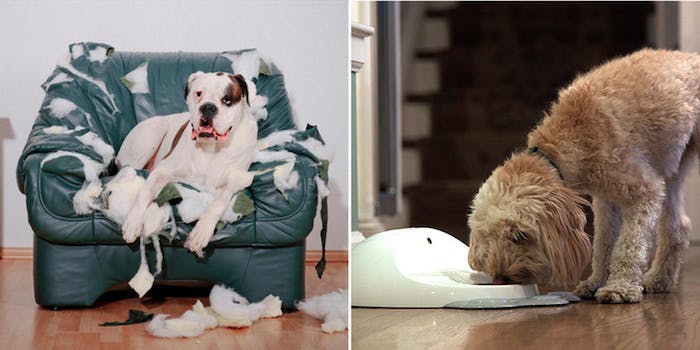 Now there’s an entire gaming console built for your dog

CleverPet uses behavioral science algorithms to create a responsive game for your pet.

Someone made a gaming console just for dogs.

It’s true, dogs get bored when they’re home alone. Whether it’s loneliness or restlessness or some other dogs-only feeling, a dog without anything to do can be a destructive pet, ripping apart couch cushions like there’s a bucket of KFC inside.

CleverPet is a gaming console that uses behavioral science algorithms to create a responsive game for dogs, doling out treats when the pups solve simple puzzles. (It’s not exactly World of Woofcraft.) The console has a microphone that listens to dog barks and a touch-sensitive pad that dogs can paw, as well as a speaker to play back an owner’s voice.

CleverPet will debut in February 2015, and you can preorder it for $250. It’s undoubtedly a ridiculous indulgence for your animal friend, but at the same time, if it helps train your dog or at least distracts her away from tearing up garbage bags and slobbering on the carpet, it will probably pay for itself in avoided damages.