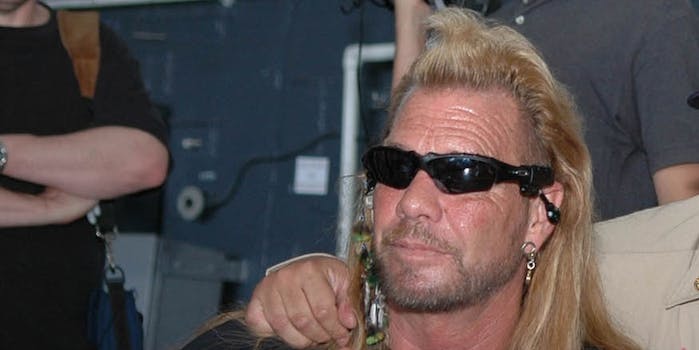 Dog, The Bounty Hunter says Hillary is the best candidate

“You’re the man now, Dog,” is precisely what supporters of Hillary Clinton were saying on Friday when TV personality Dog, The Bounty Hunter, defended the Democratic presidential candidate on Fox News.

Dog, whose real name is Duane Chapman, appeared on the show Outnumbered, where one dude faces off against a quartet of ladies. The panel was talking about presidential politics and Chapman was asked what he thought about Sen. Marco Rubio (R–Fla.), who entered the race on the Republican side earlier this month and a recent poll showed leading the GOP field.

“I don’t think…[Rubio] can beat the dynamic duo, the Clintons,” said Chapman. “I want someone in there with experience, we’re at war.”

Chapman argued he believed Clinton’s foreign policy experience would put her in a better position to take a tougher stance against the Islamic State.

“I heard her once say, if they keep doing this, we’re going to make it a parking lot,” he insisted. “Women don’t throw sand at each other like men do. I’m a Republican, but I have faith in the dynamic duo.”

“That makes me so sad right now,” relied panelist Lisa ‘Kennedy’ Montgomery. “Because I love everything about you. I think you’re powerful and heroic, but the fact you endorse Hillary Clinton… It makes me sadder than The Notebook.”

“I’m not endorsing [anybody],” Dog retorted. “I’m chasing some of these guys who want to be on ISIS. I’m seeing what they do. I’m there.”