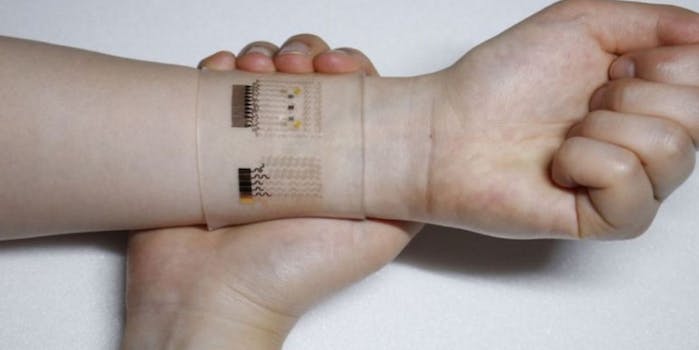 Scientists have created a graphene-based armband that monitors glucose and pH levels, offering diabetics a more convenient way of staying on top of this deadly disease. The patch is made of electrochemically-active materials placed on gold graphene and mesh. The device monitors pH and temperature which effect the enzyme-based glucose sensor, allowing the armband to monitor blood sugar levels using sweat. It sends its findings to a smartphone app, then uses a build-in microneedle array for administering appropriate doses of medication based on those readings.

The armband is being developed by South Korea’s Institute of Basic Science (IBS), and will address significant increases in the prevalence of diabetes in Korea. The diabetes boom has been linked to decreased physical activity and childhood obesity, as well as longer lifespans brought on by the country’s continuing development.

Today’s way of testing blood glucose levels consists of pricking a finger with a lancing device, or a small sharp needle. These devices can be painful, and require frequent replacement. IBS is hoping to address those shortcomings with their flexible patch.

“Precise measurement of sweat glucose concentrations are used to estimate the levels of glucose in the blood of a patient,” said Kim Dae-Hyeong, a scientist at IBS’s Center for Nanoparticle Research. “The device retains its original sensitivity after multiple uses, thereby allowing for multiple treatments. It takes an average of 15 minutes for the sweat-uptake layer of the patch to collect sweat and reach RH over 80 per cent, at which time glucose and pH measurements are initiated.”

Until recently, wearable devices have been monitoring tools that provide most users more information than they could ever want. With inventions like this graphene-based armband, those monitoring capabilities might soon be the difference between life and death.