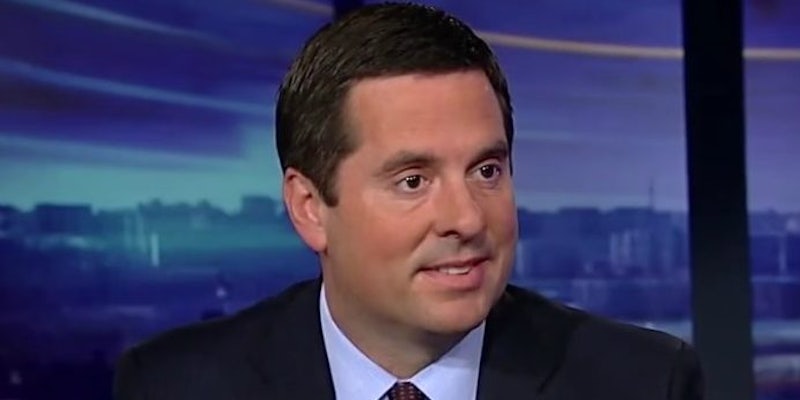 Rep. Devin Nunes, a Republican from California, appeared on Thursday to threaten media members who continue to report on the Trump administration’s alleged ties to Russia, but a Nunes spokesman said his statement was actually the exact opposite of a threat.

With the news Wednesday night that Attorney General Jeff Sessions had contact with the Russian ambassador to the U.S. only to deny it during his Senate confirmation hearings. Although Sessions on Thursday afternoon recused himself from any investigations into Russia, a number of Democrats have called for his resignation and a criminal investigation into possible perjury or lying to Congress.

But when asked about this Thursday, Nunes, who was on the Trump transition team executive committee, sent a different message.

“Look, I’m sure some of you are in contact with the Russian embassy, so be careful what you ask for here,” Nunes, the chairman of the House Intelligence Committee, said. “If we start getting transcripts of any of you or any other Americans talking to the press … do you want us to conduct an investigation on you or other Americans because you were talking to the Russian embassy? I think we just need to be careful.”

House Intel Chair Nunes: press needs to be carefu* in questioning Trump/Russia connections. "Do u want us to conduct an investigation on u?" pic.twitter.com/YNxIzDCV4A

“No, this was not a threat, it was the exact opposite–Chairman Nunes was warning against engaging in witch hunts for anyone who’s ever talked to a Russian,” Langer told the Daily Dot. “He was saying reporters would justly object if they themselves were investigated on some flimsy pretext.”

Some reporters on Twitter, though, took it as a threat, but it didn’t seem to scare Reuters reporters Jonathan Landay.

Dear Rep Nunes, let's start this ball rolling. Not only have I called the Russian embassy, I've been inside. Ball's in your court now. https://t.co/d6ry6OtIKN

Thus far, Nunes hasn’t seemed inclined to investigate the administration’s possible ties to Russia. As the Los Angeles Times pointed out, he said questions about Trump and Russia were “McCarthyism revisited” and said this is another “witch hunt against innocent Americans.”

In a Freedom of Information Act request sent to the Justice Department last month, the Daily Dot asked for access to records concerning a regulation requiring the personal approval of the U.S. attorney general before federal law enforcement can investigate or interview “members of the news media.” The policy (28 CFR § 50.10) does not define who “members of the news” are, and the U.S. Attorney’s Office has claimed in the past that determinations are made on a “case-by-case basis.”

The DOJ has yet to respond to the Daily Dot’s letter.