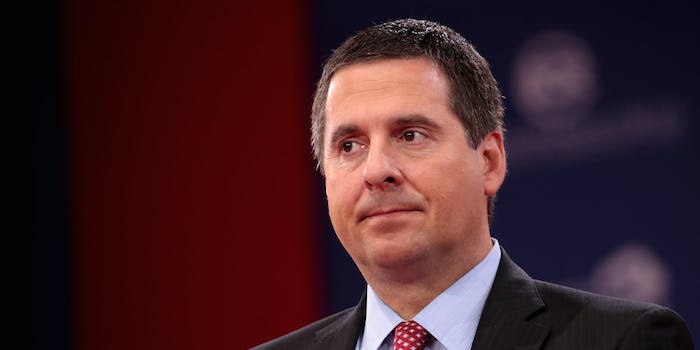 Some people are calling for him to resign or recuse himself.

Rep. Devin Nunes (R-Calif.), the ranking member of the House Intelligence Committee, is facing criticism after House Democrats released an impeachment report on Tuesday outlining conversations he had with many people entangled in it.

The report, which outlines many of the things House Democrats believe lay the groundwork for impeaching President Donald Trump, shows a web of phone conversations between Nunes, Rudy Giuliani, and businessman Lev Parnas, among others.

Parnas, an associate of Giuliani, allegedly worked with him to try and influence Ukraine to investigate Biden, according to the Washington Post. Parnas was also indicted in October on campaign finance charges. He has pleaded not guilty.

The phone calls, as CNN notes, were made in April as columns were published seeking to discredit former Vice President Joe Biden and former U.S. Ambassador Marie Yovanovitch, who testified publicly as part of the House’s impeachment inquiry.

Wow, the report includes call logs from April showing calls and texts between Nunes and Giuliani, and then (this is new) a bunch of phone calls between Nunes and Lev Parnas, including an 8-minute call on April 12. pic.twitter.com/1WpTckWRWq

The phone calls between Nunes and several people involved in the report led many people online to call for the California lawmaker to resign, or recuse himself, from the ongoing impeachment inquiry.

No, no. We’re way past that. @DevinNunes should immediately resign. He is a disgrace to our country.

OK, that's enough. Time for Devin Nunes to resign from Congress immediately or at least recuse himself from the impeachment inquiry.

The man has shown time and time again that he's not just a partisan hack, but a dishonest player whose word cannot be trusted.

Devin Nunes is in it up to his neck. Time for him to #Resign https://t.co/nr9E2DYZj6

Even Parnas’ lawyer, Joseph A. Bondy, called on Nunes to recuse himself. Bondy told CNN in November that Trump wanted Parnas to pressure Ukraine to investigate Biden.

“Devin Nunes, you should have recused yourself at the outset of the #HIC #ImpeachingHearings. #LetLevSpeak,” Bondy tweeted.

Devin Nunes, you should have recused yourself at the outset of the #HIC #ImpeachingHearings. #LetLevSpeak https://t.co/HeG8kFEDwl