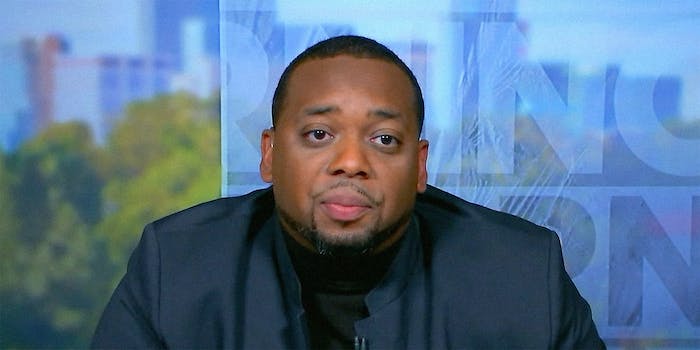 Derek Chauvin juror attended an MLK anniversary march, faces accusation of ‘lying’ to get on jury

A picture of the juror at a protest has stirred debate over whether the trial was impartial.

A juror who helped convict former Minneapolis Police Officer Derek Chauvin in the death of George Floyd has stirred debate online after it was learned that he attended a protest in Washington, D.C. last year.

The juror, 31-year-old Brandon Mitchell, was seen in a picture on social media at an event last August that commemorated Martin Luther King Jr.’s “I Have a Dream” speech from 1963. Relatives of those killed by police, including the brother and sister of Floyd, spoke at the event.

The photo shows Mitchell standing next to his two cousins while wearing a T-shirt featuring the face of King as well as the words “GET YOUR KNEE OFF OUR NECKS” and “BLM.” Mitchell is also seen wearing a “Black Lives Matter” hat.

Critics argue that the photo proves Mitchell had a political bias that may have swayed the outcome of the case against Chauvin, who was convicted of second- and third-degree murder and second-degree manslaughter.

Mitchell, who went public last week as one of the 12 jurors, admitted to attending the protest but stated that he did not remember wearing or owning the shirt. The juror added that he participated in the event in order to visit the nation’s capital.

Critics are also accusing Mitchell of lying when answering questions during jury selection that inquired whether he or anyone close to him had “participated in protests about police use of force or police brutality.”

But Mitchell argued to the Star-Tribune that his answers were truthful given that the Martin Luther King commemoration rally was not explicitly about police brutality.

Detractors have also pushed back on Mitchell’s interpretation of the event, noting that the march was nicknamed “Get Your Knee Off Our Necks” and was originally announced by Rev. Al Sharpton during Floyd’s funeral in June.

Mitchell did say during jury selection that he held a “very favorable” opinion of the Black Lives Matter movement. The juror also stated when asked about law enforcement that he was not anti-police given that he knew several officers at his local gym who were “great guys.” Mitchell stressed that he would be able to remain neutral at the trial and would base his decision on the facts of the case.

Supporters of Mitchell argue that his answers clearly show that he was honest about his views towards police and Black Lives Matter.

Even with the ambiguity, some legal experts say the situation could give Chauvin’s lawyers an opportunity to claim that their client was denied his right to an impartial jury.

Speaking with the Associated Press, Ted Sampsell-Jones, a professor at the Mitchell Hamline School of Law, pointed out that total impartiality is nearly impossible in such high-profile cases.

“Speaking frankly, Chauvin did not have a fully impartial jury in the sense we usually give criminal defendants,” he said. “That wasn’t the fault of the judge or the prosecutors, it was simply a function of the incredible publicity and public pressure.”

Minneapolis defense attorney Mike Brandt stated that while he believed the issue with Mitchell was not enough to overturn the case by itself, the situation combined with other issues such as the announcement that Floyd’s family would receive a settlement at the time of jury selection, could give Chauvin’s lawyers standing to appeal.