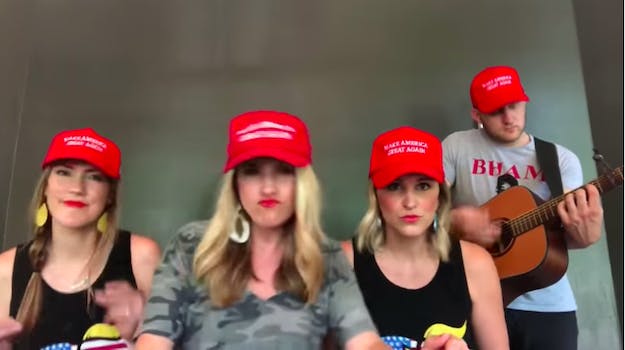 On social media, the Deplorable Choir has become a minor-league celebrity with songs that include choruses like “it’s a real tough life if you say you are a liberal” and “we stand with our General Flynn.”

But even if you don’t agree with their conservative messaging, it can be tough to get their music out of your head.

Their tunes are chipper but also confrontational. In their song about Facebook founder Mark Zuckerberg, they sang “Mother Zucker, let’s have a word/come meet me out back/with my can of whoop ass,” set to a twanging banjo.

Their songs are always political, and they have a knack for grabbing the attention of some of the celebrities in the pro-Trump circles of the internet.

But who is this trio?

In a conversation with The Daily Dot, C.J. LeRose (she’s the one you see in the center flashing exaggerated faces), painted the group as just a couple of mothers looking to have some whole-hearted Christian fun.

LeRose is a stage name and she declined to give out her real name, citing concerns for her safety from what she calls “the keyboard warriors.”

She says that the Choir are “sisters and friends who all live by each other,” but showed some humility, saying “we’re not a music group … we’re not a real band. We just started doing this because we love Trump.”

The group began in March 2018 following the Oscars when LeRose says she was annoyed “after being lectured by celebrities.”

She claims that the first song came to her while she was on the way to her child’s baseball game. And that first piece blew up. She recalls that it had 130,000 views overnight.

It was aimed at Hillary Clinton and in the video C.J. appears, wrapped in an American flag and crowing “why are you still here?”

The video has all of the elements that send Trump fans into glee: MAGA hats, American flags, and biting remarks aimed at “the libs”

Their name of the band, obviously, is a direct dig at Clinton’s mocking of Trump supporters as “deplorable.”

And people think their performances are, well, just that. In some of their earlier videos, you’ll spot a man behind them playing guitar, but LeRose says that he’s was shaken by the response.

“He could not take the heat … it was too much for him.”

And they do get hate online.

this is the worst thing ive seen in my life https://t.co/wKdhkCzDBu

Like most musicians, LeRose put in a stint in Nashville, but she says that she left “with her tail between her legs.” Now she’s settled down and is a mother of three. Though most of the relics of those days are gone, you can find one of her songs, “The Porch,” on YouTube here.

The group has a merch page on their website but LeRose says that’s just to cover expenses.

On it are items like T-shirts bearing the band’s name and shirts with slogans like “damn deplorable” and “ain’t no shame in my Trump game.”

And while they’ve been operating in the background for a bit, they’re fast becoming a topic of the conversation. Last week they earned Twitter nods from Michael Flynn Jr. and Jack Posobiec, who praised their latest song as “kryptonite to the libs.”

This is kryptonite to libs https://t.co/toUwUfAW5c

The tune, which went viral, was in support of General Flynn with the chorus “we stand with our General Flynn” and called him “a hero that’s worthy to his uniform.” The video featured people holding signs reading “I stand with General Flynn.”

They insist that they haven’t interacted with the Trump team at all, but were invited to Washington by “Women For Trump”—a Super PAC that occasionally puts on events at the Trump Hotel in the city.

They also appeared at the “Tea For Trump” event in June—a birthday party for the president (who was not in attendance) which was hosted by Virginia Women for Trump. That trip east landed them a nod in a New York Times story on the event. LeRose says that the Virginia Women for Trump paid for the plane tickets but that they had to pay for their hotel rooms, adding that “we didn’t get paid or anything, we just went and we sang and met some friends.”

They’ve been onboard the Trump train since the beginning and admire the president for the same reason that most of his followers do.

“He says what he thinks. I know it’s unpopular with a lot of people but I love how he isn’t polished.”

The Texas Christianity runs deep with the group too.

“I do feel like a lot of people prayed for him to come into office, and I feel like he was chosen from God.” But LeRose he says that she also prayed for Obama.

Their musical tastes aren’t much deeper.

“We just listen to country radio.”

And though they’re probably some of his biggest fans, LeRose says that she hasn’t been to a Trump rally because she was pregnant during the campaign. But her dream moment is to sing at one of the president’s rallies.

And with almost 50,000 Twitter followers, that’s looking increasingly likely. LeRose said that she plans to go to Trump’s upcoming rally in Texas to support Sen. Ted Cruz (R-Texas.) and that “if we don’t get invited to sing, I will be out there singing in the line.”