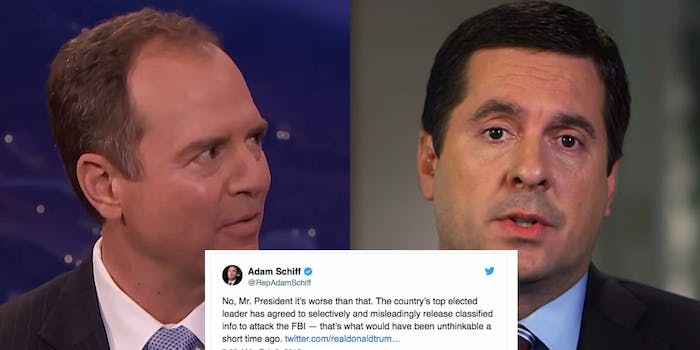 For the last several weeks, the conservative blogosphere has been embroiled in a conspiracy theory around a memo detailing supposed misdeeds by the FBI, written by Rep. Devin Nunes (R-Calif.), who sits on the House Intelligence Committee.

Democrats responded by getting up in arms about the memo, which they view as a breach of national security and overreach into the work of the FBI. This all culminated Friday with President Trump’s decision to release the memo to the public over objections of staff.

As expected, the memo isn’t the bombshell both sides had built it up to be: it is little more than cherry-picked details that attempt to paint a picture of anti-Trump bias in the early stages of the investigation into Russian interference in the 2016 election. Specifically, these accusations revolve around the surveillance of low-level Trump staffer Carter Page. The memo attempts to link Fusion GPS, the Steele Dossier, and the FBI investigation, in hopes of demonstrating FISA overreach. It does not paint a compelling picture, relying on minor information that was already well-known and a variety of unsourced claims.

Here is the memo. It is short. It says:

1) Applications for surveillance of Page made use of info from the Steele dossier
2) The initial application didn't disclose Steele had been hired through Dems
3) Steele is biased and bad and talked to the media https://t.co/vlq7ddcsUr

Journalists and Washington insiders reacted with a mixture of disinterest and disappointment, as the memo proved to be insubstantial.

So the big question we are left asking is, “What were Democrats so upset about?” Republicans blowing minor government happenings into big scandals is nothing new. It is the scale of the Democrats’ response that raised the memo’s profile, solemnly defending the integrity of the FBI and behaving as though the release of the memo would be a national security disaster that has been the surprise.

After the memo’s release, Democratic politicians were on Twitter playing up the memo’s declassification as an unprecedented breach by the president. It seemed that Democratic lawmakers were in a contest to see who could publish the most self-righteous tweet.

This unprecedented public disclosure of classified material during an ongoing criminal investigation is dangerous to our national security.

The intelligence community opposes this.

Even many Republicans oppose this.

This is dangerous territory, it disrespects law enforcement, and it's an alarming partisan attack on efforts to investigate hostile foreign interference in our democracy. https://t.co/kMVVhUQ35I

No, Mr. President it’s worse than that. The country’s top elected leader has agreed to selectively and misleadingly release classified info to attack the FBI — that’s what would have been unthinkable a short time ago. https://t.co/yGMJ1Jwj5B

A survey of the responses of Democratic affiliates indicates the messaging about national security was a particularly central part of their messaging here.

.@realDonaldTrump, how DARE you jeopardize our national security to try to protect your own ass! You’re defying the leadership of both the DOJ and FBI — Republicans that YOU appointed — who continue to express grave concerns over GOP memo. You’re a traitorous piece of human scum!

.@realDonaldTrump is putting our national security at risk to obscure the #Russia investigation, and Chairman Nunes and Congressional Republicans are helping him. #RemoveNunes https://t.co/Aid2Q635lf

Here's how the #NunesMemo is both *highly* selective in its information and ALSO highly damaging to national security: https://t.co/6GYxIJT5yG

There are some valid critiques of the memo’s release. The FBI was against the publication of the memo, making a rare public plea against it being made public. The concern on the FBI’s part is that in addition to making the organization look bad with selective material, the memo could reveal classified sources and methods. After all, the memo was released with none of the redactions requested by various groups. Some also fear that the memo will be used as a pretext for a Trump-led purge of the FBI and DOJ, which would be something to get up in arms about.

The memo doesn't come close to saying what Hannity and company want it to say. It clearly is cherry-picked. It is also laughable, as the Democrats and FBI allege, that this "memo" harms national security. What a shit show of dishonesty across the board.

So why did Democrats, many of whom had seen it, lose their shit?

Democrats have been performatively indignant about the memo because this is a part of their new brand. Establishment Democrats were presented with a choice when Donald Trump took office: they could build political strength by focusing on issues or they could focus on why President Trump is “not normal.” They have often chosen the latter, and this has often meant a full-throated defense of American institutions they have often been critical of, such the FBI. Just as the firings of James Comey and Sally Yates occasioned talking points about patriotism and America’s hallowed institutions, so to does this memo.

While Democrats may have felt that this defense of American norms and institutions would appear noble, the initial public reaction is that they overplayed their hand. Rather than highlight the foolishness of Republican gamesmanship over the memo, they endowed it the importance that the right deeply wanted it to have. The less partisan public is left feeling forced to reckon with a non-story, and legitimate concerns about Trump’s actions are reduced to partisan bickering.

Basically… they got played.

why were Democrats afraid of this lame ass memo coming out. why did Nunes think it was a bombshell. I'm so fucking pissed off. I hope the FBI breaks up after this. everyone involved with this is a fucking loser

Also, having read the memo twice, I'm still looking for the info that led to the hysteria from Democrats about the memo endangering national security.

Sources and methods aside, Democrats fighting the release of this memo simply imbued it with more importance and legitimacy.

Time will tell if the Democratic strategy to play up the memo and other violations of executive norms pays dividends in the longterm. Journalists and pundits seem largely unconvinced. However, if the memo controversy leads to electoral gains in 2018, Democrats Aaron Sorkin meets Chicken Little act will have paid off.