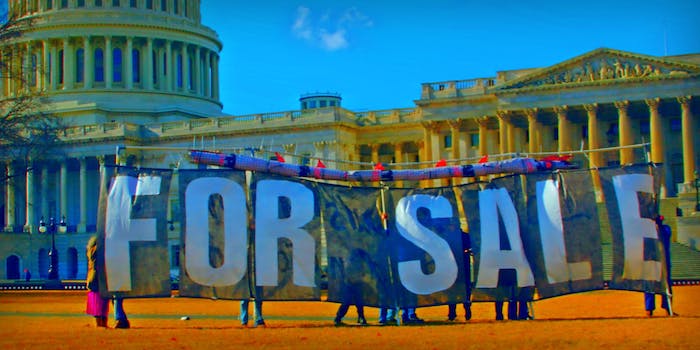 An attempt to reign the influence of money on politics has devolved into a Twitter fight.

On Thursday, Senate Democrats aimed to advance a proposed constitutional amendment that would have given Congress the power to limit financial contributions by corporations. It failed, however, after a GOP-led filibuster and a procedural vote against further consideration of the legislation.

It’s no big surprise that the so-called Democracy for All Amendment, sponsored by Sen. Tom Udall (D-N.M.), didn’t survive Thursday’s vote. Amending the U.S. Constitution requires a two-thirds majority in both the House and Senate, after which the legislation would have to be ratified by three-quarters, or 38 of the states.

Sen. Udall’s amendment was advanced in the Senate on Monday, by a vote of 79-18. More than 20 Republicans helped move it forward, but only to maintain control of this week’s legislative agenda. The final vote on Thursday was 54-42 in favor of the amendment, 13 shy of what was needed.

“Over 3 million people have signed petitions in support of a constitutional amendment,” Sen. Udall said of the need for campaign reform. Once the vote was in and the amendment defeated, Senators took to Twitter to lambaste their colleagues from across the aisle:

It’s inexcusable that Senate Republicans filibustered a vote on a constitutional amendment that would get secret money out of our elections.

The amendment was proposed to rein in Citizen’s United, a Supreme Court decision that allows corporations and other outside groups the ability to spend unlimited amounts of money on political campaigns. Democracy for All would have placed limits on campaign fundraising and spending for candidates, and defined corporations as “artificial entities,” not “natural persons.” Additionally, a third section was written to protect the freedom of the press from being abridged by the new amendment.

Attempts to control the influence corporate money on the American election system has so far been rejected by the GOP and labelled as an attack against the First Amendment. Republicans went so far as to suggested that, if passed, Udall’s amendment would signify the first time the Bill of Rights would have ever been amended. Senator Chuck Schumer (D-NY) dismissed that notion, pointing to laws against child pornography as an example of a previously imposed limitations on the First Amendment.

If the measure had passed, both parties would have likely been affected equally, as Sen. Schumer acknowledged last week: “The Soroses and the Steyers will be just as banned as the Kochs and the others. And they should be.”